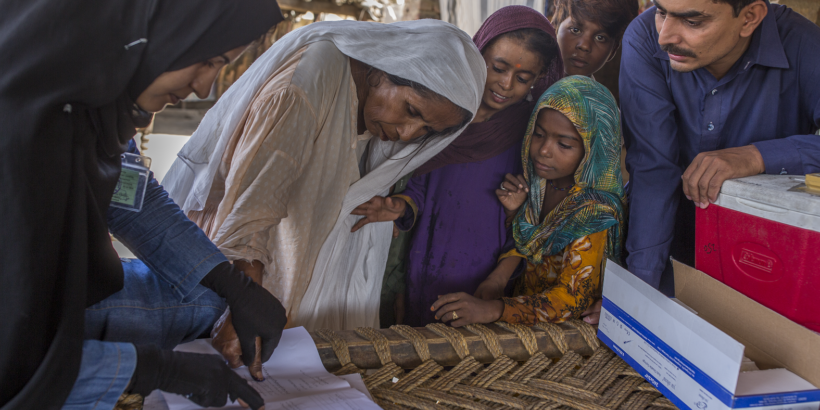 A recently published study from Hyderabad, Pakistan, shows that typhoid conjugate vaccine (TCV) is highly effective against drug-resistant typhoid. This is exciting and reassuring data as multidrug- and extensively drug-resistant (XDR) typhoid continue to spread and become more prevalent around the globe.

Drug-resistant typhoid is an increasing threat for typhoid-endemic countries. It occurs when bacteria that cause disease evolve to evade the antibiotics used to treat the infection. Multidrug-resistant typhoid, and more recently in Pakistan, XDR typhoid, which is resistant to five of the six available oral antibiotics, are more difficult to treat. These infections require more costly and harder to access intravenous antibiotics for a patient to recover.

Pakistan has been battling XDR typhoid since it was first identified in 2016. More than 70% of Salmonella Typhi isolates in Sindh province are now XDR. Following the World Health Organization recommendation for TCV introduction in typhoid endemic countries—prioritizing those with a high burden of typhoid and/or a high burden of drug-resistant typhoid—as well as Gavi, the Vaccine Alliance’s financial support for TCV introduction in eligible countries in 2018, TCV became an option for countries to consider for outbreak control and routine immunization. Hyderabad deployed TCV as part of its XDR typhoid outbreak control strategy, vaccinating 207,000 children aged 6 months to 10 years of age between February 21, 2018 and December 31, 2018.

These are the first results of real-world effectiveness of this vaccine in the context of outbreak response in an urban, typhoid-endemic setting. The data complement evidence from effectiveness trials in Bangladesh, Nepal, and Malawi that a single dose of TCV is safe and effective in preventing typhoid. It also shows that TCV is highly effective against XDR typhoid, demonstrating its potential to protect children against even the most difficult-to-treat typhoid cases.

In November 2019, Pakistan started the introduction of TCV into its routine immunization program; to date, nearly 30 million children have been immunized. TCVs are available for children during routine well-baby appointments at 9 months of age in Sindh and Punjab provinces. The remaining provinces in Pakistan are expected to introduce TCV in 2022. These data from Hyderabad provide additional robust evidence of the power of TCVs to protect children from typhoid in endemic countries. Though there were numerous challenges in getting the vaccine approved for use during the outbreak and later getting it approved as part of the routine immunization program, every step was worth the cause. It is extremely exciting to see the vaccine’s performance in an outbreak setting.

Combatting drug-resistant typhoid is a major challenge, but we now have confirmation that TCVs are a powerful preventative tool, allowing children, their families, and communities to stay healthy and helping to slow the further emergence and spread drug-resistant strains.

Photo: A vaccinator discusses typhoid conjugate vaccine with a family in Hyderabad as part of the outbreak response campaign. PATH/Asim Hafeez