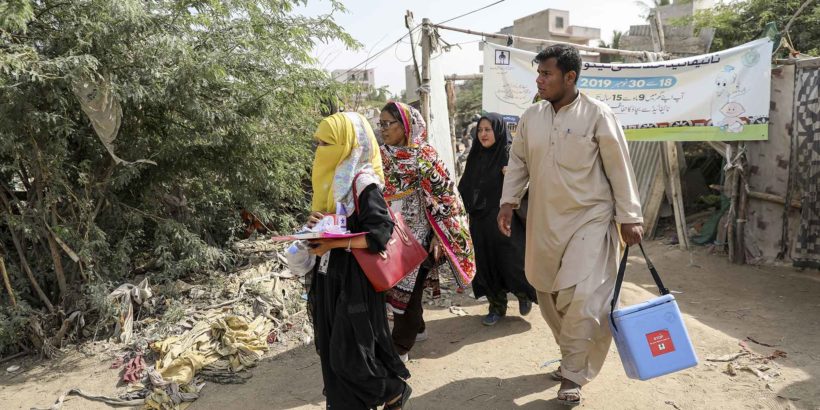 This post was originally posted on the Gavi #VaccinesWork blog.

Typhoid, the infectious disease caused by the bacterium Salmonella Typhi (S. Typhi), is spread through contaminated food and water and caused an estimated 10.9 million infections and 116,800 deaths worldwide in 2017. The disease can be serious, killing 10-30% of infected individuals in the time before antimicrobials became widely available for treatment.

Today, typhoid is treatable and can generally be managed in the community when there is access to effective antimicrobials. However, as a consequence of exposure to antimicrobials, the bacteria are adapting and systematically developing resistance to these drugs. This process makes it increasingly difficult to treat typhoid effectively. The epicentre of this problem is in South Asia, where resistance to every licensed oral antibiotic used to treat typhoid has already been reported.

In 2016, routine blood culture surveillance in Hyderabad, Pakistan led to the discovery of a new, extensively drug-resistant (XDR) variant of S. Typhi. This strain, which has since spread throughout Pakistan and caused large outbreaks, is resistant to every oral antibiotic used to treat typhoid except for azithromycin. This was major cause for alarm and helped lead the country to become the first to introduce a recently licensed typhoid conjugate vaccine into its routine immunisation programme.

The need for widespread use of this new vaccine in South Asia could not be more urgent. In 2019, researchers in Bangladesh identified 12 S. Typhi organisms that exhibited resistance to azithromycin via a single mutation. Subsequently, similar mutations have since been identified in S. Typhi from Pakistan, Nepal, and India. Genomic investigations show that these azithromycin-resistant organisms are independently arising in multiple locations. Given the increasing reliance on azithromycin as first-line treatment for typhoid fever and other infections in South Asia, azithromycin-resistant S. Typhi is likely to continue to appear and spread, creating the potential to render azithromycin ineffective.

If one XDR organism acquires this single mutation, the only way to effectively treat a patient infected with this strain would be to admit them to a hospital and administer intravenous antimicrobials. This can be very challenging in areas with limited access to hospitals and few hospital beds. Additionally, where available, inpatient treatment comes at enormous costs to families and healthcare systems and diverts resources from the treatment of other serious illnesses. In the worst affected areas, typhoid mortality rates may revert to those seen in the pre-antibiotic era, when typhoid was untreatable.

Alarmingly, we are one step closer to untreatable typhoid becoming a reality again. Now, more than ever, there is an urgency to invest in proven tools to prevent typhoid as drug-resistant strains continue to emerge and spread. Ideally, improved water and sanitation infrastructure would minimise exposure to pathogens like S. Typhi and reduce our increasing reliance on antimicrobials. However, such improvements require substantial and sustained governmental investment.

In the meantime, it is critical that we prioritise the introduction of typhoid conjugate vaccines, which have been shown to be safe and efficacious. The need for vaccination is most urgent in areas where drug-resistant S. Typhi continues to emerge and in hard-to-reach communities where access to healthcare may be challenging. This process is required to stem the spread of drug resistance by preventing infections and reducing the need to administer antimicrobials. Ultimately, this will save lives.