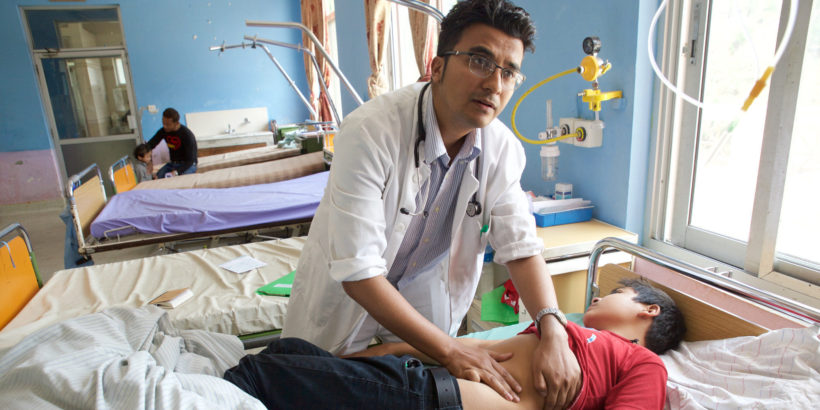 Typhoid is a bacterial infection caused by Salmonella enterica serovar Typhi (Salmonella Typhi). The Global Burden of Disease Study estimates that typhoid caused more than 9 million infections and more than 110,000 deaths globally in 2019. Research shows that the impact of typhoid in developing communities goes beyond physical illness and death. Typhoid can cause adverse pregnancy outcomes, impair physical and cognitive development, impact school attendance and performance, and limit productivity in the workforce.

Humans, once infected with typhoid, carry the bacteria in their bloodstream and intestinal tract and subsequently shed it in their stool. A person contracts typhoid by consuming food or beverages that have been handled by a person who is shedding Salmonella Typhi, or by drinking or washing food with water that has been tainted by sewage contaminated with Salmonella Typhi. Typhoid can be transmitted in an epidemic (i.e. sudden outbreaks) or endemic (i.e. regularly found within a population) fashion.

Typhoid is found mostly in countries and communities where access to safe water, sanitation, and hygiene infrastructure are a challenge, which exposes people to the conditions that enable typhoid to spread. Currently, one-third of the world’s population is at risk of contracting typhoid, and the infection remains a very real threat in many low- and middle-income countries. Typhoid is closely related to a similar disease called paratyphoid, caused by Salmonella enterica serovar Paratyphi A, B, or C. Similar to typhoid, paratyphoid is passed to humans or animals through water and food contamination. While typhoid has more name recognition than paratyphoid, the prevalence of paratyphoid caused by Salmonella Paratyphi A is increasing in South and Southeast Asia, sub-Saharan Africa, and other parts of the world. The Global Burden of Disease Study estimates that paratyphoid caused around 3.8 million cases and more than 23,000 deaths in 2019. Currently there are no vaccines available to prevent paratyphoid, although there are conjugate vaccine candidates under development for paratyphoid fever alone as well as combination vaccine candidates for typhoid and paratyphoid. Additionally, improvements in water, sanitation, and hygiene help prevent both typhoid and paratyphoid, as well as other waterborne diseases.

Invasive nontyphoidal Salmonella (iNTS) disease, caused by different, nontyphoidal Salmonella enterica strains, is a leading cause of bacterial diarrhea worldwide. According to the Global Burden of Disease Study estimates, iNTS disease caused nearly 594,000 cases and more than 79,000 deaths globally in 2019. There are hundreds of serovars that may cause iNTS infection in humans; however, Typhimurium and Enteritidis are the most common. These illnesses are not limited to human hosts.

iNTS disease is a major cause of bloodstream infection in sub-Saharan Africa among young children suffering from malaria and malnutrition, and among HIV-positive adults. Much like typhoid and paratyphoid, those with iNTS disease do not have distinctive symptoms, making proper diagnosis and treatment a challenge. Case fatality from iNTS in African adults and children is 20 to 25 percent. Currently, there are no vaccines for iNTS disease, but research for a broad-spectrum iNTS vaccine is under way.