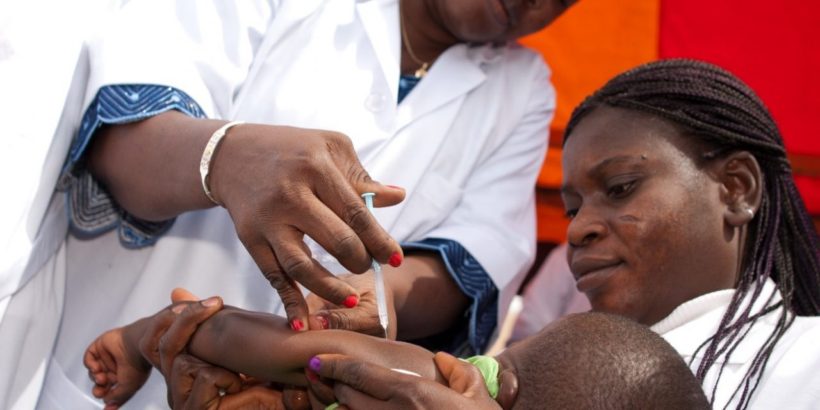 Typhoid is spread by infected human waste, so safe food, clean water, improved sanitation, and good hygiene (WASH) practices are key to preventing the disease. Because of the significant burden of typhoid and the growing threat of drug resistance, the role of vaccines alongside WASH interventions is critical in high-risk, typhoid-endemic areas. This is especially important among rural and hard-to-reach communities where progress in medical services, infrastructure, and development may be slow. Additionally, typhoid vaccines are valuable for travelers, food workers (including street vendors), household contacts of typhoid carriers, and laboratory workers.

Three classes of typhoid vaccines are currently recommended by the World Health Organization (WHO).

Uptake of the Ty21a and ViCPS vaccines in typhoid-endemic countries has been low. The Ty21a vaccine requires numerous doses, and the ViCPS vaccine has short-lived protection. Additionally, neither vaccine is amenable to use in children younger than two years of age, which limits the potential health benefits and prevents use in routine childhood vaccination programs. Gavi, the Vaccine Alliance does not provide funding for Ty21a or ViCPS vaccines.

New typhoid conjugate vaccines (TCVs) address the limitations of prior vaccines. These vaccines are of particular interest to the global health community because TCVs have the potential to overcome many of the challenges that impeded uptake of earlier vaccines, including longer-lasting protection*, fewer doses, and suitability for children younger than two years of age, allowing for inclusion in routine childhood immunization programs. Many TCVs are under development, and four have been licensed in India.

Typbar TCV, manufactured by Bharat Biotech Ltd., was prequalified by WHO in late 2017 and recommended by WHO in 2018. It is administered in a single dose and approved for children six months of age and older.

TYPHIBEV, manufactured by Biological E, was prequalified by WHO in late 2020. It is administered in a single dose and approved for children over six months of age. Clinical studies show that it is safe when given at 9 months of age concurrently with measles vaccine, and its immune response profile is similar to that of Typbar TCV.

Another advanced TCV candidate is called PedaTyph™, which is manufactured by Bio-Med and is licensed in India for children three months of age and older. Efficacy trials of PedaTyph have found more than 90 percent efficacy against typhoid. However, it has not been submitted for WHO prequalification. Seven other TCV candidates are in various stages of development.

The WHO position paper on typhoid vaccines, published in 2018, states:

WHO recommends programmatic use of typhoid vaccines for the control of typhoid fever. […] Among the available typhoid vaccines, TCV is preferred at all ages in view of its improved immunological properties, suitability for use in younger children and expected longer duration of protection. Countries may also consider the routine use of ViPS vaccine in individuals aged 2 years and older, and Ty21a vaccine for individuals aged more than 6 years. In choosing a typhoid vaccine, the costs, programmatic issues and duration of protection should be considered.

WHO recommends the introduction of TCV to be prioritized in countries with the highest burden of typhoid
disease or a high burden of antimicrobial resistant S. Typhi. Decisions on the age of TCV administration,
target population and delivery strategy for routine and catch-up vaccination should be based on the local
epidemiology of typhoid fever, including antimicrobial resistance patterns, and programmatic considerations
of the routine childhood immunization programme.

In November 2017, Gavi announced a US$85 million funding window to support the introduction of TCV in developing countries. Gavi applications for TCV introduction support are open for eligible countries.

In Sindh Province, Pakistan, Karachi and Hyderabad have faced an ongoing outbreak of extensively drug resistant typhoid since 2016. In response, an emergency vaccination campaign was launched in January 2018. Following this effort, in November 2019, Pakistan became the first country to introduce TCVs into their routine childhood immunization program with the launch of a phased introduction beginning in Sindh Province, followed by Punjab Province and Islamabad in 2021.

Samoa became the first country to introduce TCV without Gavi support in August 2021.