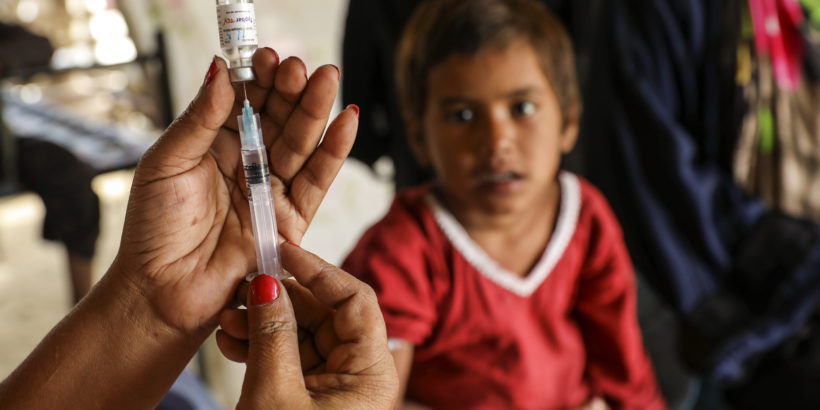 Vaccines are one of the best ways to protect communities from typhoid. While several different types of typhoid vaccines are available, the World Health Organization (WHO) recommends typhoid conjugate vaccines (TCVs) for use in routine immunization in typhoid-endemic countries. TCVs are made by attaching a string of sugars from the surface of the typhoid bacteria (called the Vi polysaccharide) to a carrier protein. This process enables the vaccine to provide longer-lasting immunity in young children.

TCVs are a lifesaving innovation. The first TCV to achieve WHO prequalification—the international approval for vaccine safety, efficacy, and quality—was Typbar TCV, manufactured by Bharat Biotech, India. Its prequalification in January 2018 opened the door for global procurement and support for TCV from Gavi, the Vaccine Alliance. Studies from several locations and across regions are adding to the robust evidence base for Typbar TCV’s safety and efficacy. Pakistan became the first country to introduce Typbar TCV into routine immunization in 2019, and Zimbabwe and Liberia are preparing for introductions in 2021.

Having just one prequalified TCV, however, can create vulnerabilities for supply. A greater variety of products, manufacturers, and formulations will be beneficial for supply, affordability, and country choice. In December 2020, WHO granted prequalification of a second TCV, TYPHIBEV, manufactured by Biological E, India. Other TCVs are in various stages of development.

A second TCV is prequalified

TYPHIBEV is a TCV where the Vi polysaccharide is conjugated to the CRM197 protein. It was initially developed by the GlaxoSmithKline Vaccines Institute for Global Health (GVGH). The manufacturing technology was transferred to Biological E, which brought the candidate through clinical development.

The newly prequalified TCV is a single-dose injectable vaccine. It can be administered to children over 6 months of age and adults up to the age of 45 years. Clinical studies demonstrated that TYPHIBEV is safe and immunogenic. These studies show that TYPHIBEV is safe when given at 9 months of age concurrent with measles vaccine, and its immune response profile is similar to that of Typbar TCV.

In addition to the two WHO-prequalified TCVs, several other TCVs are in the development pipeline or have been licensed nationally.

Another type of typhoid conjugate vaccine—one of the first—is called Vi-rEPA. Scientists at the US National Institutes of Health (NIH) developed a conjugation method attaching the Vi polysaccharide to the Pseudomonas aeruginosa exoprotein (rEPA). The NIH transferred this technology to the Lanzhou Institute of Biological Products (LIBP). PATH is providing technical assistance to LIBP in its effort to develop a TCV candidate for in-country licensure in China and eventual WHO prequalification.

Along with Typbar TCV, three other TCVs using tetanus toxoid as the carrier protein (Vi-TT TCVs) have been developed, two that have been licensed in India (PedaTyph and Zyvac TCV) and one in development in South Korea (EuTCV).

The US NIH also developed the technology behind TCVs made of Vi polysaccharide conjugated with diphtheria toxoid (DT), or Vi-DT TCVs. Scientists from the International Vaccine Institute (IVI) advanced the Vi-DT technology and transferred it to three different manufacturing partners for production: SK Bioscience of South Korea, PT Bio Farma of Indonesia, and Incepta Vaccines of Bangladesh. IVI continues to work with all three manufacturers to conduct clinical trials with the aim of local licensure and eventual WHO prequalification. Two other manufacturers, the Dalat Pasteur Vaccines Company (DAVAC) in Vietnam and the Finlay Institute in Cuba, are also developing Vi-DT TCV candidates.

Countries can take on typhoid with any safe, effective, and licensed typhoid conjugate vaccine available. All TCVs in clinical trials have so far been shown to be safe and immunogenic among young children, indicating potential future inclusion in routine childhood immunization programs once they are licensed and approved.

Typbar TCV is already making headway with its introductions in national immunization programs and in outbreak response. The WHO prequalification of TYPHIBEV and development of additional TCVs with different formulations will help improve TCV supply, lower costs, and provide for more country choice. With more options, formulations, and manufacturers, the TCV market will be diversified and fortified against supply bottlenecks. Furthermore, countries will have more freedom to choose which vaccine works best for their population and specific context.

The robust typhoid conjugate vaccine pipeline holds great promise for more children to be able to access this lifesaving intervention.

Dr. Kathleen Neuzil is the director of the Center for Vaccine Development and Global Health at the University of Maryland and the project director of the Typhoid Vaccine Acceleration Consortium (TyVAC).