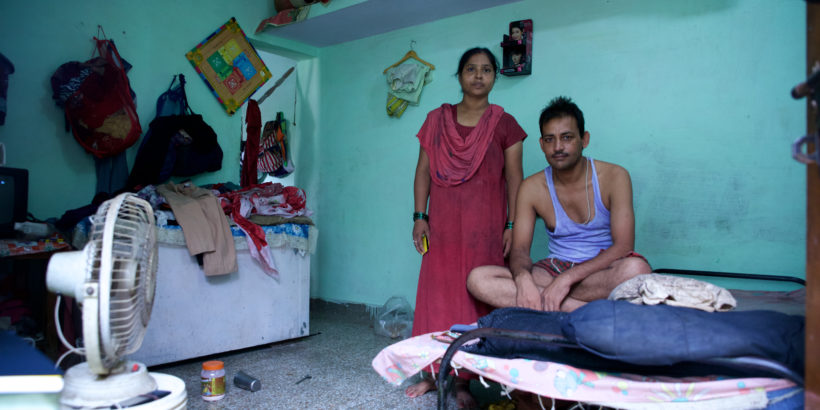 Meet 35-year-old Rakesh Kumar Pandey and his wife Bijaylakshmi. Nine years ago, Rakesh and Bijaylakshmi moved with their two children from the eastern state of Bishar to Gurugram city in Haryana state, India, in search of better employment and education opportunities. They settled in Jharsa village on the outskirts of Gurugram, where Rakesh found a job as a security guard that paid enough money that he was able to enroll both his children in school.

Despite the new opportunities that life in Jharsa afforded the Pandeys, crowding and poor sanitation infrastructure in the village meant that many in the community frequently suffered from waterborne diseases such as typhoid. One day in January 2016, Rakesh started to feel very sick. What began as a mild fever with body aches and chills soon progressed to a temperature spike of 104° Fahrenheit and vomiting. Reluctant to miss work, Rakesh initially tried to find relief at the local pharmacy where he purchased Paracetamol, a common over-the-counter pain reliever and fever reducer. However, his condition continued to worsen and Bikjaylakshmi determined it was time that her husband go to the hospital.

Soon after arriving at the hospital, Rakesh’s blood culture came back positive for not one but two diseases endemic to India—dengue and typhoid. The doctors advised that Rakesh be admitted for treatment. This meant that Rakesh was not able to work, and without paid sick leave or healthcare benefits, this caused a huge financial burden on his family. The Pandeys made the decision to move Rakesh to a more affordable hospital for treatment. For an entire month, Bijaylackshmi traveled two to three hours every day to the hospital to visit her husband. “We suffered a lot financially. We had to borrow money from my parents and in-laws in the village.”

Rakesh has since recovered and returned to work. However, if Rakesh were to get sick again, the Pandey’s already fragile financial situation stands to worsen. For this reason, Bijaylakshmi has begun to search for a job. “If I find a job then we don’t have to completely depend on my husband,” she says. “He works six days a week and if he takes any leave for any reason, they deduct it from his salary.” She has also started to take measures at home to ensure that her family stays healthy. They only eat vegetarian food, and avoid alcohol and tobacco. They wash their hands regularly with soap. However, clean water in Jharsa is difficult to find. “The water we drink is not very clean. Now and then we find dust particles and insects in the water that we drink. My husband has been feeling under the weather again. He cannot afford to be sick again, so for the past few days we have been buying mineral water bottles as he is suffering from diarrhea.”

For too many families in typhoid-endemic countries such as India, the experience of the Pandey family is familiar; the cost of illness associated with diseases such as typhoid can be quite high. Poor water and sanitation infrastructure make infection virtually inevitable, and while good hygiene practices such as regular handwashing and drinking safe water are helpful protective interventions, vaccines remain the most cost-effective defense against typhoid. In 2018, the World Health Organization recommended the introduction of a new typhoid conjugate vaccine (TCV) in typhoid-endemic countries such as India. As country policymakers consider introducing TCVs into their routine immunization schedules, it is important that they consider the emotional, physical, and financial toll of typhoid.