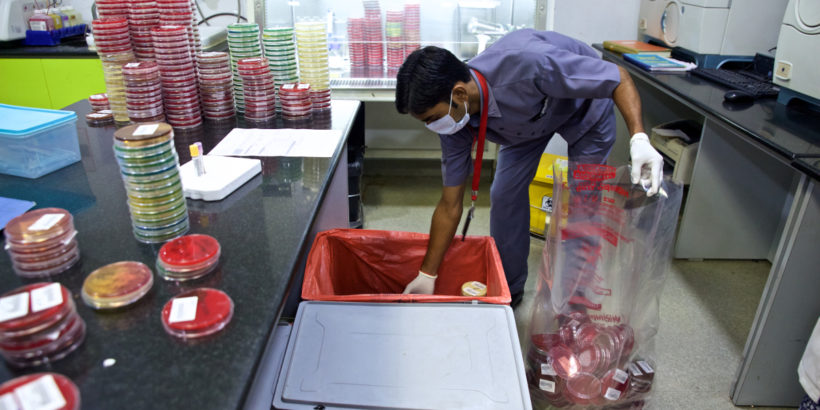 Meet Yadav. A 27-year-old lab assistant in Gurgaon, India, Yadav is remarkably conscientious about avoiding diseases transmitted through contaminated food and water. He cooks at home to avoid eating food bought on the street, where the risk of transmission is much higher. He drinks filtered water, and washes his hands with soap on a regular basis.

“I am very well aware of certain hygiene and sanitation practices,” explained Yadav, which he credits to his job at a hospital lab. Yet Yadav’s precautions cannot totally overcome the risks of his environment. Yadav lives in the village of Jharsa, which is plagued by sewage and water problems due to open drains on the street, making the village a ripe environment for the spread of typhoid and other waterborne diseases.

So despite his precautions, Yadav fell ill with typhoid, a serious disease which kills more than 200,000 people every year. The classic symptoms of typhoid hit him with full force; a high fever, constant nausea, bouts of vomiting and worst of all, body aches and fatigue. “I couldn’t sleep at night,” said Yadav. “It was very hard on me.”

Originally from Ghazipour district, 900 kilometers from his current home, Yadav had no family nearby to take care of him during his illness. Instead, his roommates helped him buy food and over-the-counter fever-reducing medicine when he became too weak to go outside. But those medicines couldn’t help him, and his fever continued to rage. After four days of ineffectual treatment, he went to the hospital he was employed at in Gurgaon—not to work, but to be admitted as a patient. A blood culture test confirmed that Yadav had typhoid. Over the next five days, he received intravenous treatment which restored his strength and energy.

The suffering Yadav endured left an indelible impression on him. Typhoid, like lightning, can strike the same person multiple times, and Yadav was not eager to repeat his experience. Soon after his recovery, he sought out and received a typhoid vaccine to add another layer of precaution to those that he already takes.

While villages like Jharsa wait for time-consuming updates to its water and sanitation infrastructure, vaccines are a powerful tool to provide immediate individual and community protection against typhoid. The two currently available vaccines, one oral and the other injectable, are safe and effective means to prevent typhoid.

However, these vaccines are primarily available to travelers, and have not been widely introduced in developing countries. Those at the highest risk, like Yadav, have to seek out and pay for a typhoid vaccine out of their own pocket. Depending on which of the two vaccines he opted for, he will have to receive a booster shot in three or seven years. Access to vaccines is easier for him, as a hospital worker; his neighbors in Jharsa may not be as lucky.

But there is hope of wider vaccine access with new typhoid conjugate vaccines in development that offer a chance to break the cycle of typhoid transmission in endemic areas. Until those vaccines reach the market, however, Jharsa residents and countless others remain in danger of contracting typhoid – even despite their precautions.

Reporting and Photos by Mithila Jariwala. This post is part of Stories of Typhoid, a series sharing the impact of typhoid on families in endemic countries.