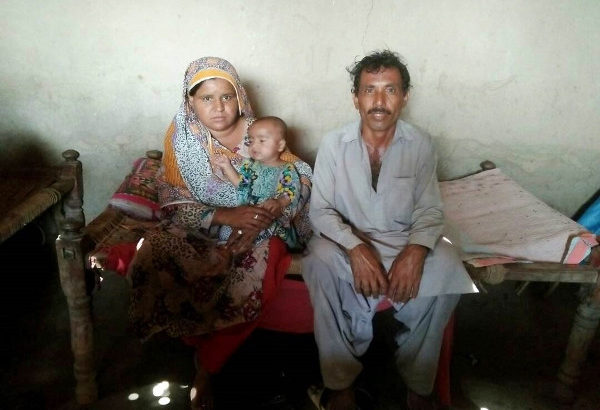 This is Samina’s story as told by her father, Ejaz Somro, to Attaullah Baig and Sultan Karim of Aga Khan University Hospital. Samina recently became ill with ceftriaxone-resistant typhoid during a large and ongoing outbreak in Pakistan. The interview was conducted in Urdu and translated into English. It has been edited for clarity and length.

In April of this year, I lost my six-year-old daughter to typhoid. Samina was the second oldest of my five children. Although she had a congenital deformity of her feet, she was a very active and intelligent little girl. My work in a brick kiln for $2-3 a day didn’t provide us enough money to afford corrective surgery for her foot, so she refused to go to school with her limping gait. She used to say that she would go to school when she was able to walk properly. Instead, she loved playing outside with her friend Naila near the hand pump. Water from that hand pump was commonly used for drinking and cooking purposes, which allowed her mother to keep an eye on her even while doing household chores.

During the early days of March of this year, Samina had been playing outside but started to feel tired. Soon her mother realized that she had developed a fever that was becoming worse. We took her to the local healer, but the traditional remedies did not cure her and she remained sick. My family had to travel from our village near Nausheroferoze, a city of Pakistan, to Hyderabad to visit my father in law who had recently undergone coronary bypass surgery. Samina came with us, but there was no change in her illness; she was still unable to eat and drink, and had become lethargic and weak. We took Samina to a public hospital in the city, where she was admitted for two days during which blood tests were done and she received blood transfusions and treatment for tuberculosis.

After returning home we received a call from Aga Khan Laboratory about her blood test showing typhoid which needed some specific medicines. It took a while to gather money from my brother in order to take her to a public hospital, but we managed it and Samina was admitted there for two more days. Her condition was deteriorating every day. We were told that her disease was a difficult one and could not be treated by the conventional antibiotics. She was suffering from abdominal pain along with high fever and eventually we had to take her to a private hospital as we felt she was not receiving adequate treatment. Samina was in terrible pain and used to cover her face with her blanket so we wouldn’t be able to see the tears and pain in her eyes. She was incredibly observant and intelligent for her age and sensed our hopelessness and fear. She used to ask us never to leave her alone on the hospital bed as she did not want to die like that and asked me to keep her in my lap till her last breath. She talked about her siblings and friends. At this point she had started to pass blood in her stool and vomit. She was transfused two packs of blood, but developed rashes. We had to transfer her to another hospital, as the hospital where she was admitted declared that her case was too complicated and could no longer be treated. It took us two hours to reach the other hospital but our journey turned out to be useless as we were refused admission and told that nothing could be done at this stage. Samina passed away on the way back home with her head in my lap, while gasping for breath in spite of the oxygen being supplied to her through a face mask.

After this tragic and traumatizing experience I have been forced to realize that there are some diseases that cannot be cured for the poor either due to lack of nearby facilities or lack of money. Something needs to be done so such diseases can be readily treated and even prevented if only to help families like ours avoid the agony of going through such an experience and being forced to live their whole life missing their loved one as we do with Samina.

Typhoid fever is a bacterial infection spread through contaminated food and water. Although normally treated with antibiotics, the rate of cases like Samina’s, where typhoid is resistant to antibiotics, is on the rise. As a result health systems must sometimes use more expensive, less accessible antibiotics, making drug-resistant typhoid more difficult to treat. As resistance increases, Samina’s story will become more common in typhoid-endemic areas. However, new typhoid vaccine candidates offer hope that similar stories can be prevented in the future. Typhoid conjugate vaccines, which offer longer duration of protection and the ability to protect young children, are currently being assessed for pre-qualification by the World Health Organization. Their potential pre-qualification represents an important step towards making typhoid vaccines accessible and affordable for people in typhoid-endemic regions.

Reporting and photos by Aga Khan University. This post is part of Stories of Typhoid, a series sharing the impact of typhoid on families in endemic countries.

Attaullah Baig is a Research Specialist at the Aga Khan University in Pakistan.