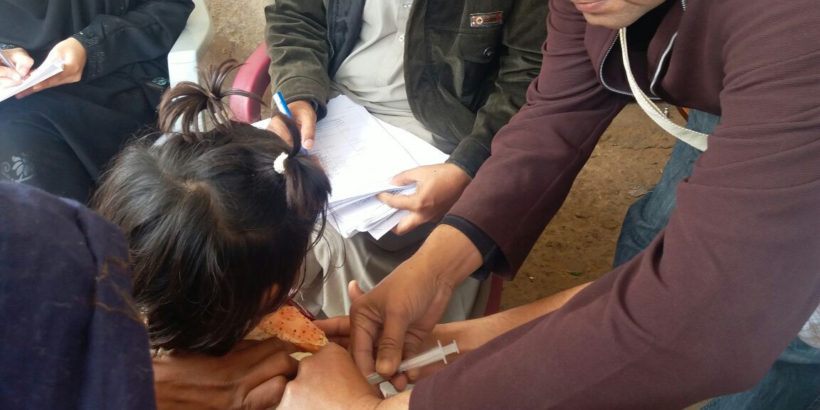 Health officials and local researchers have launched an emergency vaccination campaign to stem an outbreak of ceftriaxone-resistant typhoid in Hyderabad, Pakistan. The outbreak has sickened more than 800 people since it began in late 2016.

Over the next four months, 15 teams of local health professionals – the same individuals who administer routine immunizations in Hyderabad – will vaccinate 250,000 children between six months and five years of age.

Children often experience the highest burden of typhoid, and the outbreak in Hyderabad is no exception. Surveillance conducted by researchers at Aga Khan University (AKU), which is partnering with the local Sindh government in the vaccination campaign, found that nearly 75 percent of the reported cases occurred among children younger than five years of age.

But there is good news for the children of Hyderabad. The vaccination campaign is using a newly-prequalified typhoid conjugate vaccine approved for children as young as six months old. The vaccine, Typbar TCV®, is the first typhoid vaccine to extend protection to children younger than two. This advantage will enable local health professionals to reach thousands more young children who otherwise would have been left unprotected against the drug-resistant bacteria.

Shortly after the first cases were reported in November 2016, researchers led by Dr. Farah Qamar, an associate professor in pediatrics and child health at AKU, traced the outbreak to compromised sewer lines that were mixing waste with the local water supply.

“Our research has pinpointed the areas of Hyderabad district with the greatest need and showed that children represent the majority of those affected by the disease,” said Dr. Qamar in a press release from AKU. “We are glad to partner with government on this important initiative which will save lives and halt new cases of this preventable disease.”

Since typhoid is spread through contaminated food or water, improvements to water, sanitation, and hygiene (WASH) are critical aspects of containing an outbreak. Over the past year, AKU has conducted door-to-door educational activities to increase awareness about drinking only boiled water, avoiding street food, washing hands after using the toilet and before eating and drinking. These interventions, however, often require more time to succeed since they rely on a person’s or a community’s long-term behavioral change. Vaccination provides immediate protection, halting the spread of bacteria and building herd immunity.

The vaccination campaign also presents a valuable opportunity to gather data on the use of vaccination in typhoid outbreak responses. The large scale of the campaign will allow Dr. Qamar and her team to compile a broad data set with which to evaluate the impact of the vaccine and inform future response strategies.

This data will also help researchers better understand the effect that typhoid conjugate vaccines like Typbar TCV can have in the fight against drug resistant typhoid. In recent decades, drug-resistant strains of typhoid have emerged and spread throughout South Asia and sub-Saharan Africa, posing a significant health risk for people living in endemic areas. Misuse of antibiotics, often stemming from misdiagnosis, has only accelerated the problem, with new forms of drug-resistant typhoid emerging. The outbreak in Hyderabad, for example, is the first known ceftriaxone-resistant outbreak; until now, only a handful of such cases had ever been reported, and there is no guideline for its treatment. But if typhoid conjugate vaccines prove effective in outbreak response, they could have a major impact on future control and prevention strategies.

Children in Hyderabad will be among the first to receive a typhoid conjugate vaccine, but the new vaccine’s impact could be felt in typhoid-endemic communities around the world in 2018. Typbar TCV’s recent WHO prequalification, a designation the enables United Nations procurement agencies to purchase the vaccine, and a commitment of $85 million from Gavi, the Vaccine Alliance, has paved the way for the vaccine’s introduction in low-income countries.

Although the outbreak in Hyderabad has sickened hundreds of people across the city, the outbreak response efforts taking place over the next four months will have important implications for other communities worldwide that are bearing the brunt of typhoid.

Hannah Bassett is a communications associate at the Sabin Vaccine Institute.