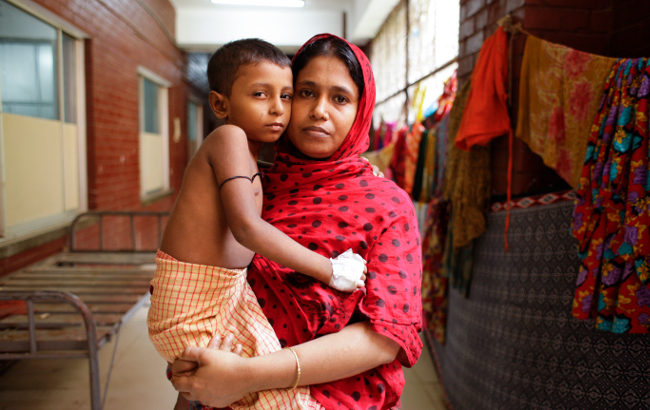 Meet Samir. The six-year-old son of a carpenter in Dhaka, Bangladesh, Samir is usually a “happy, school-going child.” But earlier this year, his mother and father, Hasina Akhter and Mohammad Rafiq, faced a crisis that was painfully familiar to many parents: their child was ill.

Children’s sick days can pose a significant burden for many parents. But for Hasina and Mohammad, taking care of a sick family member threatens their monthly income. Mohammad brings home a meager carpenter’s salary that is just enough to feed and clothe their family and maintain their small home. So like millions of parents across the developing world, when their child fell ill, Mohammad and Hasina were forced to consider they might not be able to afford treatment if Samir had a serious illness. Perhaps his low fever was just a common cold, nothing that would require them to dip into their savings. Perhaps he would get better on his own.

Yet when a week or two had passed, it became clear that Samir was not going to get better. Samir’s fever peaked at 103° Fahrenheit, and he started having severe pains all over his body. His cough and inflamed tonsils, along with a loss of appetite characteristic of typhoid, caused him to refuse food. As he gradually became weaker and weaker, Mohammad brought his son to the local doctors.

Despite the many classic symptoms of typhoid, the doctors could not confirm his illness. In Bangladesh, where many medical facilities don’t have the capability for running diagnostic tests, this is not unusual. But unwilling to give up, Samir’s parents then took him to a specialized pediatric hospital.

There, a blood test confirmed his illness: typhoid. Samir had contracted the waterborne disease that impacts 26 million people a year. Typhoid is a disease of poverty: it persists wherever people live without clean water and proper sanitation. Although typhoid is endemic to Bangladesh, typhoid vaccines are only widely available to tourists, not to the families whose children are most at risk.

To make matters worse, widespread information about typhoid is not available. Samir’s family has very little idea of how to prevent or treat typhoid. The family doesn’t maintain hygienic practices such as proper handwashing, and their drinking water comes directly from the tap without filtering or boiling.

Handwashing before preparing or eating meals is crucial to reducing the risk of ingesting harmful bacteria.  Studies of the water in Dhaka, Bangladesh, has confirmed that drinking unboiled water at home significantly elevated the risk of contracting typhoid. Vaccines are effective where they are available, but the cost puts the typhoid vaccine out of reach for most families in Bangladesh. Hygiene education, clean water, and vaccines are all needed to prevent families like Samir’s from having to make a painful choice between finances and health.

It is a challenge that Samir’s family is still struggling with. Samir is now receiving treatment but he remains weak and in the hospital. His mother, Hasina, stays by his side in the hospital until he is healthy enough to go home. Samir has not attended school for more than a month, effecting his education. His father has also missed work to tend to his son. With each day of work missed, the family must subtract a day’s wages from their finances, adding further stress to the mounting medical expenses.

Across typhoid-endemic areas, treating typhoid presents a financial burden to families who are often already struggling. The cost of the treatment itself, lost wages, transportation costs to and from the hospital, the added cost of childcare for other members of the family — all of these things add up when it comes to typhoid. And because no one has shouldered the cost of typhoid control and prevention efforts in Bangladesh, this family is left paying the price.