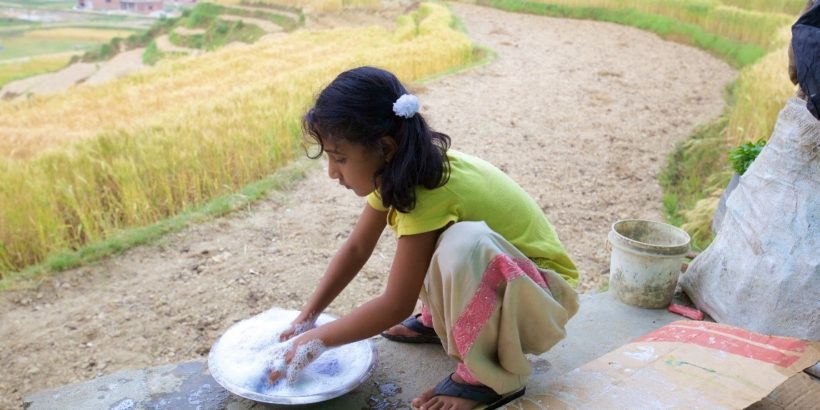 Do you remember learning how to wash your hands as a child? An adult would have taught you how to run your hands under running water and lather with soap to remove germs. Did you realize then that this lesson might have saved your life?

Every year, 1.7 million children under the age of five die from diseases that proper handwashing could easily prevent, including typhoid. Like many diseases, typhoid is passed through human feces. When fecal matter harboring typhoid bacteria makes its way onto a plate, the people eating it can get sick, suffering high fevers, vomiting, lack of appetite, pain, fatigue and diarrhea. Children, who often haven’t built up enough immunity to fight off the disease, are the most vulnerable to this disease and its dangerous symptoms.

Handwashing can be a protective measure against typhoid, as handwashing with soap dislodges fecal matter that can carry deadly pathogens.  A study in Jakarta, Indonesia, where typhoid is endemic, found that households that do not use soap for handwashing are at significantly higher risk of contracting typhoid. Washing hands can be so effective in stopping disease that it is considered an integral part of achieving the sixth Sustainable Development Goal, Water and Sanitation for All.

Those who have had typhoid know how important it is to wash hands with soap. Take Yogendra, for example. Yogendra, a father of three and a small business owner, was hospitalized and diagnosed with typhoid after over a week of high fever. His family, like many in Nepal, wasn’t in the habit of washing their hands with soap. “But now, after falling ill,” said Yogendra, “doctors have made us aware of better hygiene and sanitation practices.”

Rasmina has a similar story. Rasmina, a five-year-old Nepalese girl, had a dangerously high fever and diarrhea before she was diagnosed with typhoid and successfully treated with antibiotics. At the time, her family washed their hands, but only with water — never with soap. Before discharging Rasmina from the hospital, the doctors made sure to speak with her parents about the importance of including soap in their washing regimen.

Thankfully, Yogendra and Rasmina both got better. They and their families now know to wash their hands with soap, and will have a better chance of avoiding typhoid in the future as a result. But fathers and children shouldn’t have to fall ill in order to learn about proper handwashing practices. Typhoid-endemic communities should be provided with the information and resources they need to wash their hands after using the toilet or cleaning a child, and before handling food, eating or feeding a child. Simply providing these tools can greatly improve the health of communities.

A study of Indian food-handlers found that education efforts can significantly increase the level of knowledge that food-handlers have about hygiene measures like washing hands before handling food and keeping nails cut and clean. Street food sold by food-handlers is a significant source of typhoid transmission. When food-handlers keep their hands clean, they reduce their risk of passing on typhoid to potentially dozens of customers.

Handwashing efforts are a key component in preventing typhoid, and perhaps best of all, it is cost-effective. While we cannot forget the ultimate importance of vaccination and water sanitation improvements, widespread and habitual handwashing can provide an affordable and easy stopgap.