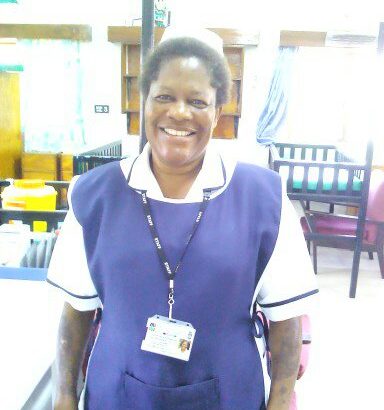 Fondation Mérieux is currently validating a novel enteric fever diagnostic test in an African setting. Throughout this process, there are a number of opportunities to meet people with powerful stories of typhoid. During my recent visit to Malawi for the project’s site initiation visit, I had the opportunity to meet Sarah. Sarah is an experienced research nurse who is part of the Malawi Liverpool Wellcome Trust typhoid research study team at the Queen Elizabeth Hospital in Blantyre, Malawi. Sitting together at the hospital as we waited for patients to arrive, Sarah and I started to chat about typhoid. Through our conversation, I realized that Sarah had personally experienced the devastating toll of typhoid on her family not only once, but twice. I was amazed and moved by her courage, and her willingness to share her story with us.

My name is Sarah Limbanazo Mwanamanga. I am 54 years old and a research nurse in Malawi, one of the poorest countries in Africa. I have experience working on numerous studies, and now I’m working on a typhoid study In Blantyre, Malawi.  I would like to share my own story of typhoid. This story happened about 22 years ago when I was working as a nurse-midwife at Malamulo Hospital.  I was 32 years old, married with four children and living with my family including my brother and husband, both of whom I lost due to typhoid.

Malamulo Hospital has been providing healthcare to one of the poorest districts in Malawi since 1902. Located 65 kilometers southeast of the city of Blantyre in Thyolo District in the southern part of Malawi, the hospital serves a catchment population of 129,000 from two surrounding districts, where the average income is less than $1 per day. It is a major referral hospital for Malawi and Mozambique and also runs 16 mobile sites with three centers operating on a daily basis for out-patient services.

That’s where I was working when my brother and husband got ill while under my care.  My brother had malaria-like symptoms, including nausea, fever, vomiting, body aches, headaches and diarrhea. He was admitted to the hospital and some blood tests were taken, including a blood culture. But before the results were out, he passed away, barely three days after he fell ill. We only discovered he had typhoid after he had already died. This was a big blow to me and my family because as a nurse caring for patients, I had not been able to properly treat my brother due to the delay of the blood culture test.

A month later, my husband started having similar symptoms and worse still, he was vomiting blood and passing tar-colored black stool. We thought it was due to the iron tablets he had been taking.  Little did we know his illness was due to the complications of typhoid.  He was admitted to the hospital and received blood transfusions and the antibiotics gentamycin and ampicillin to no avail. He was put on oxygen therapy, but it was too late. He passed away within the hour.

During this same period, I was also experiencing the same symptoms that my brother and my husband had presented. I forced the laboratory staff at Malamulo to test me for typhoid because I suspected that was what was making my family sick. The test was done and the results came out: I had typhoid. I got treated with chloraphenical and ampicillin for ten days and was cured.

I am positive that we got this typhoid from drinking contaminated water. We used to drink water from a dam — water which we were advised to boil –but when cleaning our teeth or washing some fruits and vegetables, no one boiled the water, leaving us at risk of contracting typhoid. In Malawi, many people don’t have access to clean water. Communities are at threat to becoming victims of typhoid, just as I happened to be a victim of this life-threatening disease 22 years ago.

This is a partner blog contributed by the Fondation Mérieux, a member of the Coalition against Typhoid.

Valentina Picot is a research advisor at Fondation Mérieux.