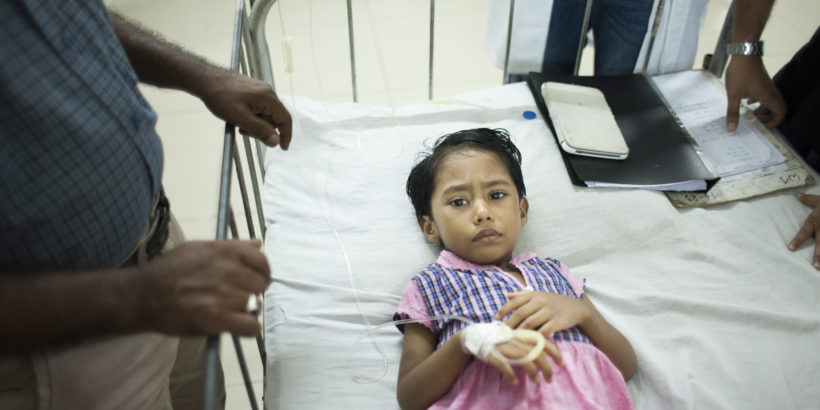 On May 15 we recognize the International Day of Families, a time to focus on the importance of investing in social and economic policies that protect the world’s most vulnerable individuals and families. As the world battles the COVID-19 pandemic, we must remember that families everywhere are hurt hardest by this crisis, working to stay safe and healthy, caring for children who are out of school, all while trying to continue work responsibilities and income generating activities. Although COVID-19 is the headline news, we cannot forget that for too many families there remains a multitude of health risks to worry about, including typhoid. In honor of this day, here is a story about one family that was able to take on typhoid together.

Meet six-year-old Fatia Ferdousi. In July 2016, she arrived at the local hospital in Dhaka, Bangladesh, with a high fever and severe abdominal pain. As the nurses examined Fatia and took her vitals, her father explained that his young daughter first began to feel sick about two weeks ago, exhibiting a mild fever, cramps, and body aches. Initially, he gave her an over-the-counter fever reducer, however, her fever quickly returned and her condition continued to deteriorate. With his daughter in pain and no idea of the cause, he knew it was time to seek medical help.

While Fatia’s father was unfamiliar with his daughter’s symptoms, the staff at the hospital immediately recognized her symptoms as consistent with typhoid–a bacterial illness that is endemic to Bangladesh, accounting for more than 1 million cases and 12,500 deaths per year. After running a blood culture which confirmed her diagnosis, the doctors informed Fatia’s father that given the severity of her infection she needed to be admitted to the hospital for treatment and monitoring.

Despite feeling relieved that Fatia was receiving the necessary care, her diagnosis was nonetheless upsetting for her father, especially given the hardships that he and his family had endured during the previous months. Fatia’s mother had recently died, leaving him as a single parent of three children while juggling a full-time job to support his family. These struggles were now compounded by the emotional toll of his youngest child falling ill as well as the financial impact of the hospital expenses and the potential lost income from missing work while staying with Fatia at the hospital.

As Fatia began treatment, her father asked the doctors how he could avoid his other two children from getting sick. The doctors explained that typhoid is transmitted through contaminated food and water and asked about the family’s living environment and their hygiene practices. Fatia’s father shared that the family typically uses untreated water directly from the tap, realizing that contaminated water likely caused Fatia’s illness. To prevent further infections, the doctors advised to the family to always filter or boil water before drinking or preparing food, and to routinely wash their hands with soap and clean water. Thanks to the doctors and nurses at the hospital, Fatia and her family are better equipped to help prevent typhoid in the future.

As Fatia’s condition began to improve and she was no longer in critical condition, she was allowed to return home for the remainder of her recovery. She still needed intensive care as she remained very weak. Fortunately, Fatia’s relatives were able to help care for her and her brothers, allowing her father to return to work and pay off the medical expenses. In order to avoid another case of typhoid in the family, Fatia’s father informed his relatives of the information the doctors shared about typhoid, including the preventive measures such as handwashing, to which the family should adhere.

After a few more weeks at home, Fatia had almost fully recovered. However, the time away from school meant that she had to repeat her lessons the following year. Despite this, Fatia and her family are considerably lucky. In endemic countries, a typhoid diagnosis is often devastating for a family, resulting in lost wages, high medical expenses, missed school, surgery and even death. Fortunately, the new typhoid conjugate vaccine—which is safe and effective for children as young as six months—is available for endemic countries to introduce into routine immunization programs, allowing millions of children and families to avoid the hardship that Fatia and her family endured.