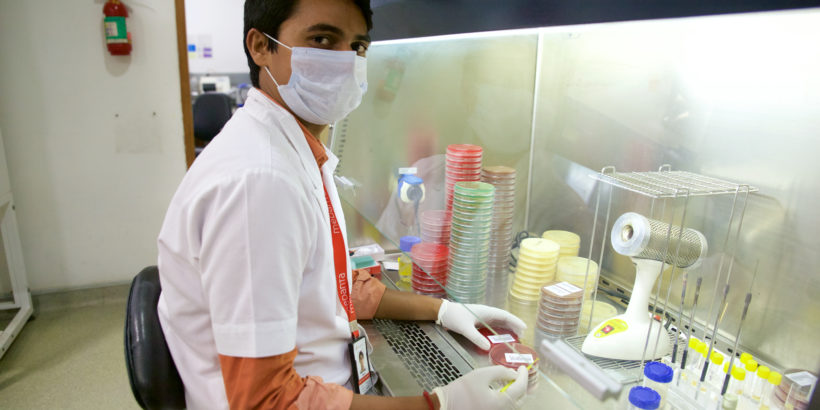 Meet Dagar, a 23-year-old technician working in a microbiology lab at a hospital in Gurgaon, India.

Dagar is originally from Fakharpur village in Barpat district of Uttar Pradesh state. Every day he travels for three hours from his village to Gurgaon and back for work. Dagar has been working both day and night shifts at the hospital for a year now. “I prefer working night shift as I don’t have to deal with heavy traffic. It makes my commute more pleasant.”

Recently, Dagar began experiencing shivers and a high fever up to 103°. He also began to lose his appetite. For the first two days that he wasn’t feeling well, he just rested without any medication. Since there was no improvement on the third day, he consulted a nearby doctor in his village. At first the doctor suspected malaria and prescribed some medication for the same. “I first went to see a doctor in my village; he gave me some pills. I felt better for a while then I had high fever and weakness again.”

He then visited a doctor at the hospital where he worked and the doctor drew a sample for blood culture. His blood culture tested positive for Salmonella paratyphi.

On being asked of a possibility of getting infected with typhoid by working in a microbiology lab with various blood samples, Dagar responded, “If the staff in the lab takes precautions then they won’t get infected. They must wear masks and gloves regularly. I make sure I do that.” Dagar observes strict hygiene and sanitation practices at work but is not as strict about it when home. “When I am at home I wash my hands but not always with soap.”

Dagar’s home is located in a community where many families have access to some improved sanitation, and many drink water directly from the household tap.” Dagar normally eats home cooked food, but once in a while enjoys a meal out. “I normally travel back home after work but the day before I got sick, I remember staying over at a friends place here in Gurgaon and we ate some street food. It is possible that the food made me sick.”

Dagar had a high fever for almost 8 days and felt extremely weak for more than two weeks. Ultimately, the illness made him miss more than three weeks of work. “I suffered a lot during the typhoid fever. I felt very weak and had constant severe headaches. I have never felt so physically weak before.” However, Dagar was thankful about the fact that he was able to rest at home during the time he was sick and he had his family to feed him and look after him.

Dagar, who is currently pursuing his MSC in Microbiology, is one of the many reasons the typhoid community gathered in Hanoi last week at the 11th International Conference on Typhoid and Other Invasive Salmonelloses.  Researchers, scientists, government leaders, and other colleagues from around the world presented the latest research on the typhoid burden, typhoid conjugate vaccine and WASH. We know that for all the new data and research presented, there are names, faces, and families who have borne the consequences of typhoid. It is people such as Dagar who spur the ongoing work to translate global progress in typhoid into local impact to improve health.

Thankfully, Dagar accessed appropriate treatment and his family helped him recover. For too many people, many of them children younger than 15 years of age, this is not the case. As we move forward after the conference, the story of Dagar, alongside those of others who have their own typhoid story, motivate us to work for integrated prevention and control strategies to take on typhoid.