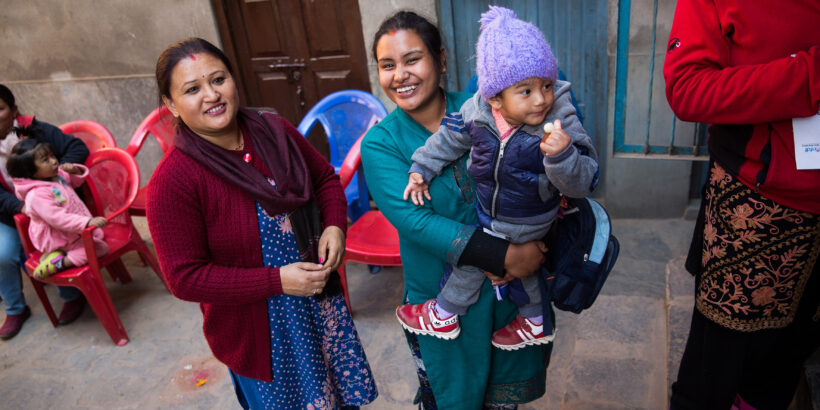 In late 2019, just two years after the World Health Organization (WHO) prequalified the first typhoid conjugate vaccine (TCV), Typbar TCV®, efficacy results from a typhoid-endemic country—Nepal—were released. Those interim results from the Typhoid Vaccine Acceleration Consortium (TyVAC) study demonstrated that the vaccine conferred 81% protection against blood-culture-confirmed typhoid in children in Nepal. As the first typhoid vaccine that could be given to children younger than 2 years old, this was a breakthrough. The study provided evidence of clinical protection and confirmed the programmatic ability to protect the youngest populations against typhoid through vaccination.

Now, a year and a half later, the same study has completed its two-year follow-up analysis. The results bring fantastic news for long-term protection against typhoid in Nepal and other countries with a substantial typhoid burden.

A lurking killer in Nepal

Nepal has one of the highest burdens of typhoid in the world. In 2019, there were more than 82,000 estimated typhoid cases, or 271 cases per 100,000 population. Typhoid takes an economic and financial toll on Nepal’s families and communities, resulting in missed school, work, and wages.

Concerns are also increasing about drug-resistant typhoid in Nepal, the surrounding region, and many other typhoid-endemic countries. Experts worry that antibiotics may soon be unavailable, unaffordable, or ineffective.

TCVs, which WHO recommended in 2018, can protect children and families from typhoid. They are especially effective when integrated with other interventions. These include: appropriate and timely diagnosis and treatment; water, sanitation, and hygiene (WASH) improvements; and health education.

A reassuring result after two years

TyVAC, including the Oxford University Clinical Research Unit and Patan Academy of Health Sciences, conducted a Phase 3 randomized controlled efficacy trial. The study measured the protection of a single dose of TCV in children 9 months to 16 years in Lalitpur, Nepal, starting in 2017. The study team published the results of an interim analysis in 2019 based on data from 20,000 children.

Now the team has completed its two-year follow-up analysis. During the two-year follow-up period, TCV was found to be safe and generated a strong immune response. Approximately 95% of vaccine recipients tested still had detectable antibodies 18 months after vaccination. Most excitingly, the clinical protection against confirmed typhoid fever was found to be 79% two years after the one-dose vaccination.

The 79% efficacy is not statistically different from the interim result of 81%, and the study reported no evidence of reduced immunity after two years. This confirms that clinical protection from TCV against typhoid lasts at least two years. This is the longest period that any study has tested to date. We await further follow-up data on the duration of protection.

A crucial tool in the fight against drug resistance

Nepal is already working to introduce TCV with Gavi support in the near future. The evidence from this study further supports the Government of Nepal’s decision to introduce TCV. It also supports what we know in general: TCV has the potential to save lives, prevent illness, and slow drug resistance in Nepal.

WHO recommends TCV in all typhoid-endemic countries, particularly those with high disease burden or presence of drug-resistant typhoid. Three countries—Liberia, Pakistan, and Zimbabwe—have already introduced TCV into routine immunization with Gavi support. Several others, including Nepal, are planning future introductions.

It is heartening to know that there is now evidence from this and other recently published efficacy studies from Bangladesh and Malawi of the protection offered by TCV against typhoid. The increasing body of evidence provides even more reasons for countries to take action to prevent and control typhoid through introduction of TCV into their routine immunization programmes.