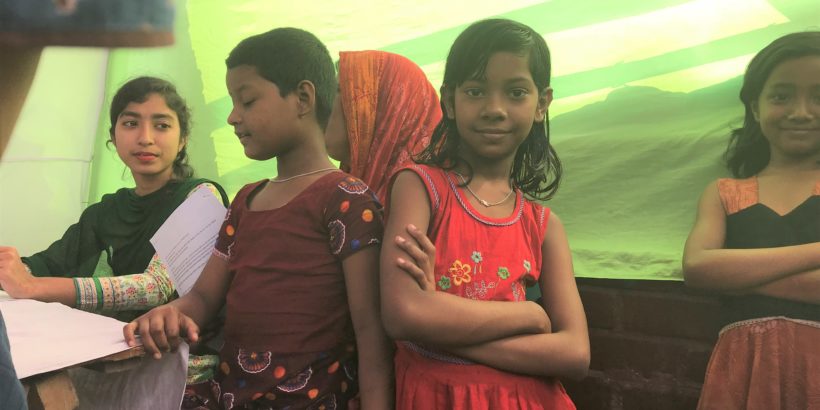 Recent data has confirmed that Bangladesh has one of the highest typhoid burdens in the world. But we have extremely good news. A study conducted in Mirpur, Dhaka, with typhoid conjugate vaccine (TCV) has found that the vaccine prevents 85% of cases among vaccinated children aged 9 months to 15 years.

The news of a safe and effective intervention to protect children from a persistent threat such as typhoid brings us great hope.

A long-time threat to children in Bangladesh

For decades, we have worked to advance prevention and control of enteric diseases such as cholera and typhoid. We have seen, too often, the risks and realities of typhoid right in front of our eyes.

Mothers carrying their feverish children into hospitals and health facilities to be tested for typhoid is a very common sight in Dhaka. Children—and even adults—face morbidity due to this food- and waterborne illness. Mortality rates seem comparatively low because antibiotics are still effective against most typhoid infections when properly diagnosed. However, the situation is alarming. Typhoid in Pakistan, our neighboring country, has shown resistance to all first-line antibiotics (amoxicillin, co-trimoxazole, and chloramphenicol), fluoroquinolones, and third-generation cephalosporins. When this extensively drug-resistant (XDR) typhoid is detected, the only oral drug available is azithromycin. Bangladesh is seeing the rise of drug-resistant typhoid strains. This stresses our local health care system and threatens to make typhoid untreatable.

We urgently need a readily accessible vaccine to protect children from this disease. This is why many volunteers and partners in the Dhaka community, international partners, and donors collaborated to make this trial a reality.

A vaccine trial in Mirpur

The Typhoid Vaccine Acceleration Consortium (TyVAC) implemented a phase 3 trial in Mirpur, Dhaka with a unique design. Instead of randomizing children in the study 1:1 to receive TCV or a placebo vaccine (Japanese encephalitis), the trial grouped the 61,567 participants between 9 months and 16 years of age into clusters based on where they lived in Mirpur. Mirpur is a densely populated area with a high burden of typhoid. The clusters were then randomized so that every child in each cluster received the same vaccine. Finally, the study followed the children for 18 months to observe how many developed typhoid. Blood culture laboratory testing confirmed all diagnoses.

This study design approximated a real-world setting where a typhoid vaccine is used within a community. Data show the protective effectiveness of TCV against blood culture-confirmed typhoid at 18 months post-vaccination is 85%.

This finding is similar to the efficacy observed in other TCV trials in India, Malawi, and Nepal. This replicated high level of effectiveness within a cluster-randomized design gives us confidence that a real-world introduction of TCV would see similar reduction in disease.

Vaccine effectiveness of 85% is a scientific feat worth celebrating. It also means lives saved, families’ livelihoods restored, and hope renewed. TCV will be instrumental to not only prevent morbidity and mortality, but to increase antibiotic stewardship, specifically in endemic regions such as South Asia. In a country such as Bangladesh, 25 suspected cases are unnecessarily treated with antibiotics against every true case of typhoid. Rather than presumptively treating for typhoid, fewer cases of typhoid will present, therefore minimizing inappropriate treatments. TCV will also limit the spread and further evolution of XDR typhoid.

Bangladesh has not yet decided to introduce TCV into routine immunization. This study’s results highlight the lifesaving potential of TCV for children in Bangladesh and all typhoid-endemic countries. We hope the results will further reinforce to decision-makers in countries with a high typhoid burden that TCVs are a strategic and effective way to prevent and control typhoid.