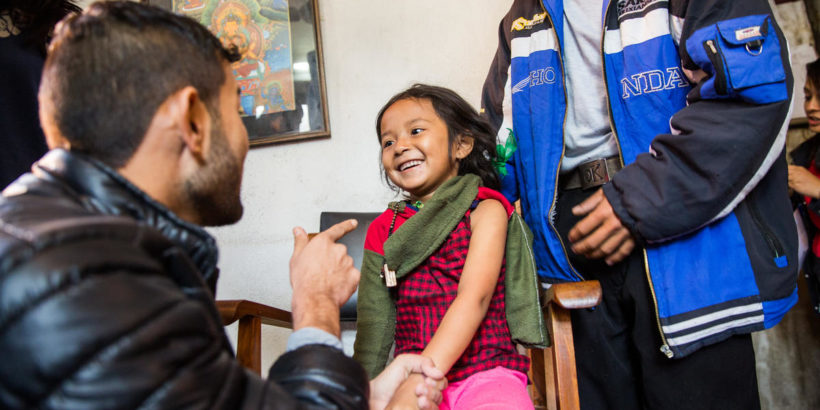 A large field study of typhoid conjugate vaccine (TCV) in Nepal has shown a single dose to be safe and effective in reducing typhoid in children aged 9 months to <16 years in an endemic setting.

Caused by the bacterium Salmonella Typhi, typhoid is a major cause of fever in children in low- and middle-income countries and is responsible for nearly 11 million cases and more than 116,000 deaths a year worldwide.

In 2018, the World Health Organization (WHO) recommended the introduction of TCV for infants and children over six months of age in typhoid-endemic countries, and added it to its list of prequalified vaccines.

Although TCV has been shown to protect against the disease in studies involving healthy volunteers in the UK, no efficacy studies in endemic populations had been completed.

Now, the Typhoid Vaccine Acceleration Consortium (TyVAC), which includes researchers from the University of Oxford, the University of Maryland School of Medicine, and PATH has completed a large field study in Nepal and published the interim analysis in the New England Journal of Medicine.

The study involved 20,000 children aged 9 months to <16 years of age, who were randomly given one of two vaccines; half received TCV and half received the Group A meningococcal (MenA) vaccine – the latter acted as the control group.

Blood tests showed that typhoid occurred in 7 participants who received TCV and 38 receiving Men A vaccine. The researchers noted that these were preliminary results, and that the study will continue to follow-up the participants for two years.

Andrew Pollard, Professor of Paediatric Infection and Immunity at Oxford University’s Department of Paediatrics, said: “This is the first study to show that a single dose of TCV is safe, immunogenic, and effective, which provides clear evidence that vaccination will help efforts to control this serious disease and is a strong endorsement of the WHO policy for vaccine implementation.”

“The efficacy of these results in an endemic population adds to a growing body of evidence supporting the use of TCV to reduce disease and save lives in populations that lack clean water and improved sanitation,” said Dr. Kathleen Neuzil, MD, MPH director of the Center for Vaccine Development and Global Health at the University of Maryland School of Medicine and director of TyVAC.

These results show the vaccine has the potential to significantly reduce the burden of typhoid in high-risk populations. This is especially timely with the recent spread of extensively drug resistant typhoid, which threatens child health in affected regions.

TCVs have the potential to overcome many of the challenges that impeded uptake of earlier vaccines, including longer-lasting protection, fewer doses, and suitability for children under two years of age, allowing for inclusion in routine childhood immunization programs.

Funding for the study was provided by the Bill & Melinda Gates Foundation.

The full paper, ‘Phase 3 Efficacy Analysis of a Typhoid Conjugate Vaccine Trial in Nepal,’ can be read in the New England Journal of Medicine.

Oxford University’s Medical Sciences Division is one of the largest biomedical research centres in Europe, with over 2,500 people involved in research and more than 2,800 students. The University is rated the best in the world for medicine and life sciences, and it is home to the UK’s top-ranked medical school. It has one of the largest clinical study portfolios in the UK and great expertise in taking discoveries from the lab into the clinic. Partnerships with the local NHS Trusts enable patients to benefit from close links between medical research and healthcare delivery.

About the University of Maryland School of Medicine

Now in its third century, the University of Maryland School of Medicine was chartered in 1807 as the first public medical school in the United States. It continues today as one of the fastest growing, top-tier biomedical research enterprises in the world — with 43 academic departments, centers, institutes, and programs; and a faculty of more than 3,000 physicians, scientists, and allied health professionals, including members of the National Academy of Medicine and the National Academy of Sciences, and a distinguished recipient of the Albert E. Lasker Award in Medical Research.  With an operating budget of more than $1 billion, the School of Medicine works closely in partnership with the University of Maryland Medical Center and Medical System to provide research-intensive, academic and clinically based care for more than 1.2 million patients each year. The School has over 2,500 students, residents, and fellows, and more than $540 million in extramural funding, with most of its academic departments highly ranked among all medical schools in the nation in research funding. As one of the seven professional schools that make up the University of Maryland, Baltimore campus, the School of Medicine has a total workforce of nearly 7,000 individuals. The combined School and Medical System (“University of Maryland Medicine”) has an annual budget of nearly $6 billion and an economic impact more than $15 billion on the state and local community. The School of Medicine faculty, which ranks as the 8th highest among public medical schools in research productivity, is an innovator in translational medicine, with 600 active patents and 24 start-up companies. The School works locally, nationally, and globally, with research and treatment facilities in 36 countries around the world. Visit medschool.umaryland.edu

The full paper and commentary can be read in The New England Journal  of Medicine.

Please also check out our most recent blog post, “A reassuring new milestone for typhoid prevention,” from OUCRU-Nepal’s Mila Shakya and Dikshya Pant.