In 2018, TyVAC was thrilled that the global policy landscape was established to support the accelerated introduction of typhoid conjugate vaccines (TCVs). 2019 has proven to be an equally exciting year. TCV was successfully and safely used for outbreak response in Zimbabwe and Pakistan. In February, Zimbabwe led the way with the first-ever outbreak response vaccination campaign against typhoid in sub-Saharan Africa. The vaccine was used in Pakistan in April 2019 as part of the response to the current extensively drug resistant (XDR) typhoid outbreak.

Important new information is available to inform countries that have yet to make a decision about TCV introduction. Recently published interim results from the first year of the clinical study in Nepal show a single dose of the vaccine is safe, immunogenic, and effective. The vaccine prevented more than 80 percent of typhoid cases in children as young as 9 months in an endemic setting. This provides clear evidence that vaccination has the potential to significantly reduce the burden of typhoid in high-risk populations. We are looking forward to additional data from Nepal, as well as the other study sites in Bangladesh, Burkina Faso, and Malawi.

We are proud to work in partnership with Gavi, the Vaccine Alliance to help high-burden countries make decisions about introducing this new TCV. This TCV will help prevent disease in the near-term while governments work on more integrated prevention and treatment approaches that include improvements in safe water, sanitation, and hygiene.

Wishing everyone a safe, happy, and healthy New Year.
Kathleen Neuzil, TyVAC director and the Take on Typhoid team

Pakistan took a major step forward in typhoid prevention and control when they became the first country in the world to introduce TCV into their routine childhood immunization program. Starting in Sindh Province, a 3-week vaccination campaign in urban areas vaccinated 9.8 million children aged 9 months to younger than 15 years of age between November 18 and December 7. Health care workers and government officials in Sindh will now work to transition to routine TCV immunization for all children when they are 9 months old. Additionally, Pakistan will continue rolling out TCV by province throughout 2020 and 2021 until the vaccine is available nationwide.

The introduction of this vaccine comes at a critical time to protect children from an ongoing XDR typhoid outbreak. Children who fall ill with these strains, which are resistant to all but one oral antibiotic, have limited treatment options and the cost of that treatment can place additional economic burdens on families.

The TyVAC study in Nepal recently published interim results in the New England Journal of Medicine. The analysis shows a single dose of TCV is safe and effective in an endemic setting. The TCV reduced typhoid in children as young as 9 months of age. TCVs have the potential to overcome many of the challenges that impeded uptake of earlier vaccines, including longer-lasting protection, fewer doses, and suitability for children younger than two years old, allowing for inclusion in routine childhood immunization programs.

The study involved 20,000 children aged 9 months to below 16 years of age. Half of the participants received TCV and half received the Group A meningococcal (MenA) vaccine (control). Blood tests showed typhoid in 7 participants who received TCV and in 38 who received MenA vaccine. These are interim results and the study will continue to follow the participants for two years. This study provides clear evidence to support vaccination efforts to control typhoid. The vaccine has the potential to significantly reduce the burden of typhoid in high-risk populations, which is critical with the recent spread of XDR typhoid.

Talking typhoid at the RITAG

In mid-November, country decision-makers from across Africa came together for the Regional Immunization Technical Advisory Group (RITAG) meeting hosted by the World Health Organization’s Regional Office for Africa (WHO AFRO). The RITAG provided an opportunity to discuss policies and strategies for vaccines across the region, including topics such as new research, immunization delivery services, and ways to improve equity and immunization coverage. On the sidelines of the RITAG, TyVAC hosted a dinner meeting with key EPI managers and National Immunization Technical Advisory Group chairs from eight countries, as well as key stakeholders from WHO AFRO, to discuss typhoid and the potential of TCVs. This meeting gave TyVAC the opportunity to share information about how TyVAC can support countries with TCV introduction and work we have done in the region to date. Participants also discussed typhoid burden, TCV cost effectiveness, the role of TCV in their countries, as well as lessons learned from the decision-making progress in countries already moving forward.

Leading the way with TCVs at ASTMH

Last month, Take on Typhoid joined thousands of global health professionals across sectors and regions of the world for the American Society of Tropical Medicine and Hygiene’s (ASTMH) 68th Annual Meeting in National Harbor, Maryland, USA. This year’s meeting featured multiple symposia and presentations dedicated to typhoid prevention and control, reflecting the current momentum as countries begin to introduce TCV into their national immunization programs. We celebrated the first of these countries to commit to introducing TCV—including Pakistan, Liberia, and Zimbabwe—at our lunchtime reception on November 22, with featured remarks from Dr. Farah Naz Qamar of Aga Khan University; Adolphus Clarke of Liberia’s Ministry of Health and Social Welfare; and Dr. Portia Manangazira of Zimbabwe’s Ministry of Health and Child Welfare. The speakers highlighted their experiences in advocating for and preparing to introduce TCV, and pointed to the power of data in informing their decision-making. This was expanded on during TyVAC’s symposium which discussed early lessons from these countries’ experiences with TCV, and how they can be applied to countries that will follow their lead. The results of these early introductions will likely be on full display at the 2021 International Conference on Typhoid & Other Invasive Salmonelloses, which was announced at the meeting, and will be held March 16 – 18, 2021, in Cape Town, South Africa. 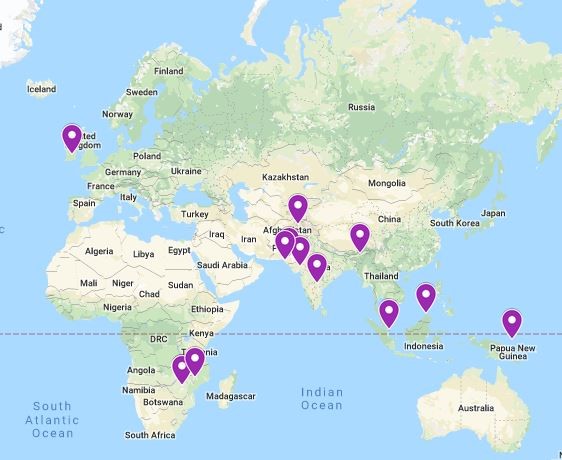 While health officials in Pakistan continue to report cases of XDR typhoid as part of an ongoing outbreak that began in November 2016 and has grown to include more than 19,000 cases, on November 18 Pakistan became the first country to introduce the new TCV into its routine immunization program. The roll-out began with a three-week catch-up campaign in Sindh Province to stem the XDR outbreak.

More than 30 students from Melosa Secondary School in Zomba District, Malawi, were admitted to St. Luke’s Hospital on November 11 with suspected typhoid. The outbreak was traced to untreated water from a dam. Typhoid is endemic to Malawi, with more than 16,000 cases estimated per year, with children under 15 years of age most at risk.