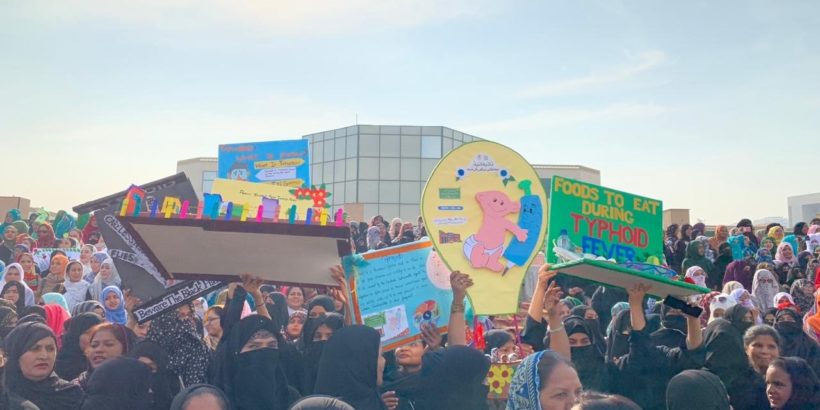 During the past three years, Pakistan has confronted a devastating outbreak of extensively drug-resistant (XDR) typhoid to become the first country to introduce typhoid conjugate vaccine (TCV) into routine immunization. Recently, Aga Khan University convened experts and local officials during a two-day seminar to share successes and lessons learned from this journey. Below is an excerpt from the AKU News press release on the key takeaways and latest research from the event.

An emergency vaccination campaign in Sindh following an outbreak of typhoid in the province has found the new typhoid conjugate vaccine (TCV) to be effective in preventing new cases of the disease, said researchers at an event at Aga Khan University (AKU) in January.

More than 10,000 cases of extensively drug-resistant (XDR) typhoid, a strain of the disease resistant to all but one oral antibiotic, have been reported since 2016 in Karachi and Hyderabad. This outbreak led to the launch of an emergency vaccination campaign in January 2018 in the worst affected areas of Hyderabad where 207,000 children between 6 months and 10 years of age received the vaccine.

At the same time as the campaign, researchers set up a surveillance system in the same area to screen a cohort of more than 20,000 vaccinated children to detect cases of typhoid during an 18-month period. They found that 9 out of 10 children in the cohort, or 89 percent, did not contract the disease.

“The results of the vaccine’s effectiveness are in line with a study in Nepal,” said Dr. Farah Qamar, an associate professor in pediatrics and child health at AKU. “This strengthens the case for the national rollout of the vaccine.”

During the event, Dr. Qamar spoke about how lessons from the Hyderabad campaign had been applied in Lyari, Karachi, and during the Sindh-wide rollout, conducted in November 2019, which reached 9.8 million children during a three-week period.

A mop-up campaign is now being planned in Sindh in March 2020 to immunize children between the ages of 9 months and 15 years missed during the previous drive. Researchers noted that parents whose children haven’t received the vaccine are keen to participate in the forthcoming immunization campaign.

Dr. Anita Zaidi, director of vaccine development, surveillance, and enteric and diarrheal diseases at the Bill and Melinda Gates Foundation, expressed her support for efforts to generate evidence of the efficacy for this vaccine against typhoid fever. She added that a strategy to combat typhoid requires an integrated approach that covers access to clean water, improved sanitation, and immunization.

For more details on the event, please see the full press release from AKU News. For additional information on Pakistan’s XDR outbreak and journey to TCV introduction, check out the following blogs and resources:

“Every interaction is an intervention” by Rabab Batool, Aga Khan University Hospital

“The perfect storm in Pakistan: Unsafe drinking water and drug-resistant typhoid” by Kathleen Neuzil, University of Maryland School of Medicine