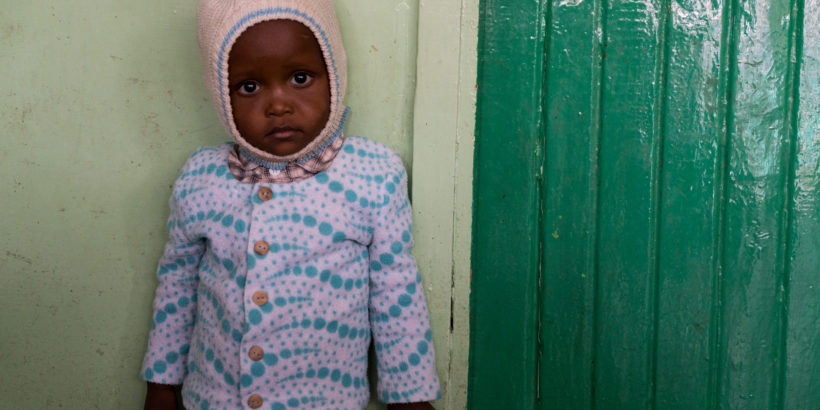 Meet Gift King’Oo, a one-year-old boy visiting the community health clinic in Mukuru, Kenya, an informal settlement just outside of Nairobi. In February 2018, Gift started getting sick, exhibiting common symptoms of typhoid including fever, diarrhea, and fatigue. One night when Gift’s fever spiked, his mother, Eunice, knew it was time to bring her son to the clinic.

The next morning when Eunice and Gift arrived at the clinic, they were met by Dr. Felisters Kerubo. As Dr. Kerubo assessed Gift, she asked Eunice about her son’s symptoms as well as their water and hygiene habits at home. Typhoid, a bacterial infection usually spread through contaminated drinking water and poor sanitation, is common in their community and Gift’s condition seemed consistent with typhoid symptoms. Eunice explained that she knew the dangers of drinking unclean water and assured Dr. Kerubo that she takes measures to purify their family’s water. “I treat the drinking water with tablets, and even wash the fruits and vegetables,” she said. “I am not sure how Gift got sick.”

Dr. Kerubo agreed that Eunice’s precautionary measures at home should have protected Gift. However, there are other environments where typhoid can be contracted. For example, Eunice told Dr. Kerubo that she works as a secretary at a school in the community and Gift often accompanies her to work. When Dr. Kerubo asked about the school’s water supply, Eunice admitted that the school’s tap water supply is not safe to drink. As often as possible, she tries to buy purified water from a vendor when at work, but admitted that sometimes she is unable to so she and Gift  consume the tap water. This unclean water could be the source of Gift’s recent illness.

Gift was just one of Dr. Kerubo’s 60 patients that day at the busy clinic in Mukuru, but many of the cases and stories she encountered were similar to Gift and Eunice’s. The clinic serves a population of families who often struggle to afford enough food and clean water, much less pay for medical treatment and care. While she has diagnosed and treated many patients with typhoid throughout her five years at the clinic, Dr. Kerubo suspects that only a portion of those who suffer from typhoid seek care. “The impact from typhoid is economic. To treat it, you need money and time.” These are things that many in the community do not have to spare. Dr. Kerobu believes that the key to taking on typhoid in Mukuru is through an integrated approach, including increased investments in infrastructure (pipes and sewage systems), preventive interventions (such as typhoid conjugate vaccines), medical treatment options (including diagnostics and appropriate antibiotics), and education.

While Dr. Kerobu drew Gift’s blood to test for typhoid, she reinforced Eunice’s knowledge on how the disease spreads and listed various precautions that she can take at home and when she’s at work at the school to avoid future infection. However, Dr. Kerobu did not suggest what is likely the most efficient and cost-effective preventive intervention: a typhoid conjugate vaccine (TCV). While the government of Kenya offers free immunization for children younger than five years-of-age, TCV are not currently part of their routine immunization schedule. That could change if Kenya works to introduce the new WHO-recommended TCV. TCVs have longer-lasting protection, require fewer doses, and are suitable for children six months of age and older, allowing delivery through routine childhood immunization programs.

Expanding access to this life-saving vaccine in typhoid-endemic countries such as Kenya will keep children—like Gift—healthy. When combined with improvements in water and sanitation infrastructure, as well as education and lessons on hygiene behavior, the impact of typhoid on communities such as Mukuru can be greatly reduced. Eunice and Gift left the clinic that day with a prescription for antibiotics and improved awareness of the dangers of typhoid. Hopefully, with the introduction of TCV, another trip to the clinic for typhoid can be avoided.

Reporting and photos by Adriane O’Hanesian. This post is part of Stories of Typhoid, a series sharing the impact of typhoid on families in endemic countries.