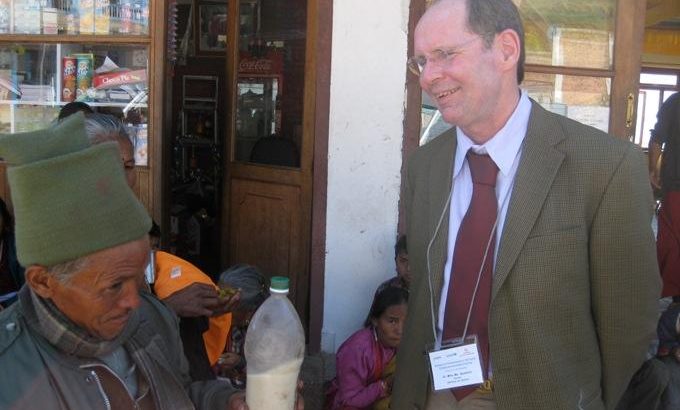 The Coalition against Typhoid (CaT) website now features information about typhoid for travelers. The section includes a traveler’s account of his experience falling ill with typhoid fever and lessons learned about typhoid prevention. The unfortunate traveler in this case is Sabin’s own Mike McQuestion, director of the Sustainable Immunization Financing Program.

High fevers, chills, malaise, loss of appetite and a splitting headache. Those are just a few of the symptoms associated with a typhoid fever infection. It’s enough to remind anyone that comes down with typhoid while traveling that it’s important to stay up on top of their travel immunizations.

Mike McQuestion would know. He came down with typhoid in November 2010, after spending several weeks abroad in Africa and South Asia. He did not check to see if his vaccines were up to date before he left. Ironically, McQuestion is a frequent traveler because he works in countries around the worldadvocating for broader use of vaccines. We can all learn from his experience.

Typhoid is highly endemic in many parts of Asia and Africa, in communities without access to safe water and basic sanitation. McQuestion points out that even in the more affluent communities and tourist destinations of typhoid endemic countries, travelers are still at risk of contracting the disease through contaminated water or food. Because of this, travelers should stay away from questionable food and drink that may have come in contact with contaminated water or an infected individual. McQuestion did not heed this warning. He admits to eating meals that most wary travelers would and should avoid.

It was during a layover when McQuestion started feeling ill. As his symptoms got worse, he decided to cut the remainder of his travels short and returned home.

For a week he laid in bed sick with fever, thinking he just had malaria- Yes, “just malaria” he thought- but when his malaria medication didn’t help, he decided to see the infectious disease specialists at Johns Hopkins Hospital.

Having had typhoid himself, and knowing where McQuestion had been visiting, the physician suspected typhoid right away. He also warned that the worst was still to come. According to McQuestion, his doctor was right. McQuestion soon developed a rash, diarrhea and delirium.

McQuestion spent 8 days in the hospital, where doctors were able to isolate the typhoid bacteria from a blood specimen and prescribe an antibiotic cocktail best suited for his particular infection.

However, even though his symptoms relented, McQuestion’s problems did not end there. About 5-10% of people infected with Salmonella Typhi go on to become long-term carriers of the bacteria and are able to (unknowingly) pass on the infection to other people. The most famous example of the carrier state is the notorious “Typhoid Mary,” a cook who worked for wealthy families in turn of the century New York and sickened dozens of people.

To avoid this risk, patients known to be infected with typhoid fever are discouraged from returning to work or public life until doctors can perform cultures to guarantee that no bacteria remain in their system. In fact, if the patient handles food or works with children or in a health care facility, they can be legally barred from work until the cultures have been performed.

Therefore, if you are infected with typhoid fever, it is important to do 3 things:

1. Take the full course of antibiotics prescribed to you, even if your symptoms improve
2. Do not prepare food for other people, and wash your hands very carefully with soap and water after using the bathroom
3. Have your doctor perform cultures to make sure you are no longer carrying the bacteria

In the end, the causative agent of McQuestion’s fever was a bacteria called Salmonella paratyphi A. Truth be told, an updated typhoid vaccine would not have protected McQuestion from this infection. However, if he had followed guidance and been more careful as to what he ate or drank he might have avoided illness.

For McQuestion, this experience motivated him to update all his immunizations, including his typhoid vaccine.

Humans are highly mobile creatures. 50 million foreigners arrive in the US each year. 30 million US citizens leave and come back, and 1 million of those travelers come back sick. While some illnesses are unavoidable, it’s important for travelers to be aware of risks and to take necessary steps to protect themselves and the people around them.

How can you avoid typhoid fever?

Two basic actions can protect you from typhoid fever:

It may surprise you, but watching what you eat and drink when you travel is as important as being vaccinated. This is because avoiding risky foods and drink will also help protect you from other illnesses, including travelers’ diarrhea, cholera, dysentery, hepatitis A and paratyphoid.

CDC recommends that you … “Boil it, cook it, peel it, or forget it”

2. Get vaccinated against typhoid fever.

You will need to complete your vaccination at least 1-2 weeks (dependent upon vaccine type) before you travel so that the vaccine has time to take effect. Typhoid vaccines lose effectiveness after several years; if you were vaccinated in the past, check with your doctor to see if it is time for revaccination.