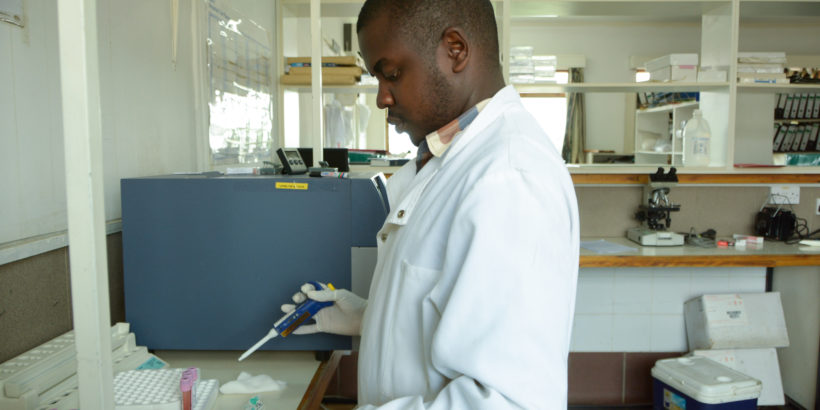 For decision-makers considering introduction of typhoid conjugate vaccines (TCV), data are key. National surveillance systems are the main mechanism for capturing data on typhoid cases but creating an effective typhoid surveillance system is easier said than done. Many countries with a high typhoid burden currently lack the capacity to collect data in a comprehensive, accurate, and timely manner.

The Typhoid Vaccine Acceleration Consortium (TyVAC) has worked with country decision-makers in Malawi and Nepal to analyze existing surveillance data and triangulate it with other sources to fully understand the typhoid burden. This knowledge assists decision-makers in deciding whether and how to introduce TCVs.

Laboratory confirmation of cases through blood culture is the gold standard for typhoid surveillance. The World Health Organization (WHO) recommends two types of blood culture-confirmed surveillance for typhoid and other invasive salmonelloses: minimal or enhanced. Minimal surveillance is carried out through passive reporting of laboratory-confirmed cases or active review of laboratory records. This type of surveillance is laboratory- or facility-based, often with at least one sentinel site designated in each geographic region to help account for varying typhoid incidence within a country.

Enhanced surveillance, on the other hand, is a more time- and resource-intensive population-based approach. It defines typhoid incidence in a specific area over a fixed period. Data are collected through community and household visits to more actively capture the typhoid burden.

Some enhanced surveillance has been carried out by the Malawi-Liverpool-Wellcome Trust Clinical Research Programme. The program has conducted blood culture-confirmed surveillance and antimicrobial testing for typhoid at Queen Elizabeth Central Hospital in Blantyre since 1998. These data, from a catchment area of 1.3 million, have revealed increases in typhoid incidence over time and the emergence of drug-resistant strains of S. Typhi in Malawi.

Uncovering the burden of typhoid in Nepal

Sentinel surveillance has taken place through two major initiatives. The Surveillance for Enteric Fever in Asia Project (SEAP), led by Sabin Vaccine Institute, took place from 2013 to 2019 in multiple facilities throughout Nepal. The STRATAA study, led by the University of Oxford, took place between 2016 and 2018 at Patan Hospital, an urban facility in the Kathmandu Valley. Data generated from these two surveillance studies showed high typhoid incidence across Nepal, making a strong case for TCV introduction.

While Nepal has ongoing government-led surveillance initiatives for other diseases of public health importance, none of these currently include typhoid.

Creating the ideal surveillance system for typhoid is no easy feat. Under-resourced laboratories make it difficult to diagnose typhoid quickly and accurately. For many low- and middle-income countries, suspected typhoid cases are frequently confirmed using Widal tests, which have low sensitivity, or by symptomatic diagnosis, which is unreliable since typhoid shares clinical characteristics with several other conditions, including malaria. Limited sentinel surveillance generates good case data in some geographic areas while raising questions in others. In Malawi, for example, while there was strong surveillance from Blantyre District, the lack of a laboratory-confirmed nationwide surveillance system created difficulties in describing the burden elsewhere in the country. To fill in this gap, TyVAC worked with country stakeholders to use typhoid outbreak data as an alternative to show geographic spread in other districts.

Environmental sampling for the surveillance of S. Typhi organisms also brings its own challenges. It requires a complex isolation process to identify the bacteria and lab infrastructure to test samples. However, the development and scale-up of lower-cost testing alternatives are increasing the feasibility of environmental surveillance.

It is important that decisions about vaccine introduction and other interventions are made considering all available data sources.  Although typhoid burden is underestimated and hard to quantify, TCVs are a crucial tool for typhoid prevention and control. Typhoid annually causes several million cases and more than 110,000 deaths globally, mostly in children. Even with imperfect surveillance data, enough is known about global typhoid burden, increasing drug resistance, and the safety and cost-effectiveness of TCVs to make them an effective tool to combat typhoid.

As countries work to curb the burden of typhoid with TCVs, parallel investments and improvements in typhoid surveillance systems are essential to generate even better data. With more accurate data, countries can continue to refine burden estimates, improve delivery strategies, and, ultimately, expand vaccine impact.