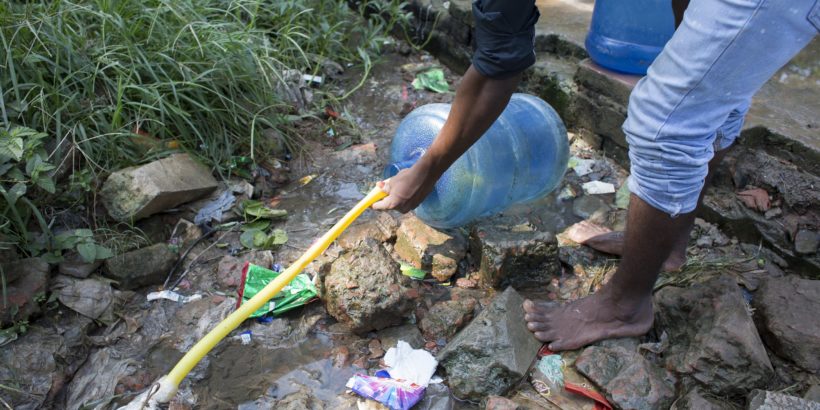 South Sudan, Afghanistan, and Syria. These three countries alone account for more than half of the world’s 22.5 million refugees. Iraq, Yemen, Burundi, Central African Republic, Democratic Republic of Congo, and Myanmar follow not far behind. Our world today is witnessing the highest number of refugees since the United Nations (UN) began keeping records after World War II.

Refugees flee their home countries for myriad reasons, including persecution and conflict. For many displaced persons, sanctuary arrives in the form of a refugee camp. While they offer respite from harsh situations, these camps are often under-resourced and over-crowded, offering new challenges.

The makeshift nature of many camps, with limited infrastructure and overcrowding, puts refugees at particular risk for communicable diseases including typhoid. Typhoid is a bacterial illness that spreads through contaminated food or water. Nearly 12 million people suffer from typhoid annually, and more than 128,000 cases are deadly. Children and adolescents under 15 years old are disproportionately impacted, especially in circumstances where clean water and sanitation are difficult to access.

The risk of diseases, including typhoid, that arise from the lack of infrastructure and over-crowding of refugee camps is further heightened by climate change concerns that often bring about extended drought periods or particularly heavy rainy seasons. Droughts may cause refugees living in sparse camps to seek water from very shallow sources that are more likely to be contaminated with typhoid and other bacteria, while floods wreak havoc on inadequate sewage or sanitation systems, allowing human waste to permeate water sources. Medical care is also a source of difficulty in refugee camps, as access to and availability of proper antibiotics to treat typhoid is limited.

In situations such as these, where circumstances heighten disease transmission, prevention is one of the most effective means of keeping refugees healthy. A new typhoid conjugate vaccine (TCV), recommended by WHO this year, confers long-lasting protection, requires only one dose, and can be given to children as young as 6 months of age. As we’ve recently seen with the massive oral cholera vaccine campaigns in several countries, vaccines are a similarly effective way to keep displaced people protected, particularly against diseases like typhoid.

The best prevention approach for typhoid is an integrated one. Access to clean water, improved sanitation facilities, and good hygiene practices alongside TCVs are imperative for curtailing typhoid transmission cycles.

Refugees’ lives are upended when they flee their homes and communities. Heightened risk of diseases is only one challenge they face, but it’s an unnecessary one. We have the knowledge and tools to prevent and control typhoid, thereby minimizing the burden and impact on an already vulnerable population.

Ashley Latimer is a Senior Policy & Advocacy Officer at PATH.