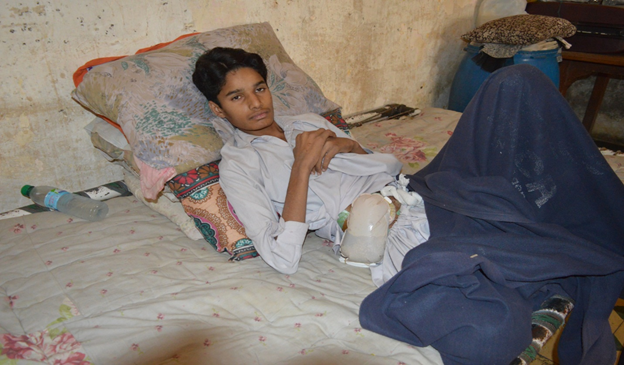 This is Gul Rahim’s story of typhoid, as told to Attaullah Baig of Aga Khan University Hospital on January 7, 2017, and translated into English. The interview was conducted in Urdu and has been edited for clarity and length.

I am a 15 -year -old boy from a remote and underprivileged village in District Buner, Khyber Pakhtukhwa of Pakisan. My father is too elderly to be employed and my older brother has been unsuccessful in finding a sustainable job, so after fourth grade, I decided to leave school and get a job. This led me to move hundreds of miles from my village to the city of Karachi. I knew it wouldn’t be easy to live so far away in a new city, but I believed it was worth it to be certain that my two younger siblings would not be left starving.

With high hopes I travelled to Karachi. I quickly found employment as a kitchen assistant for a family with the help of my cousin who already lived there. The months that followed were the happiest of my life. My kind employers gave me a small room, free meals and weekends off, and I was content knowing that I was able to support my family. I couldn’t help but dream about a secure and financially stable future.

To show gratitude for all his support, one day I went out to eat with my cousin. A roadside cart was all I could afford after sending money to my family. After I came back, I started to feel uneasy and soon developed a fever. I worked in my ill state for two days until my employer noticed and told me to stop working. She took me to a nearby clinic where a blood test diagnosed me with enteric fever. Because of my nausea, I could barely hold down any food or medicine. The fever made me so weak that I could barely move. After nine days of unbearable sickness, my cousin took a day off from work to take me to a doctor. This time I was able to keep down my prescribed medication and my sickness was cured. However, I still couldn’t muster enough strength to work and had to resign.

With no job and no energy, I moved in with my cousin who worked at a milk shop for minimum daily wages. Two weeks after I first got sick, I was suddenly struck with intense pain in my abdomen and was rushed to the nearby hospital. Although my abdominal scans were taken, I was not informed of the result and was discharged. However, the next day I again suffered severe abdominal pains along with vomiting. My cousin took me to another hospital, where the doctor notified me that I had enteric perforation and needed immediate surgery.

My family was very distressed when they found out, but immediately understood the seriousness of the situation and requested me to be transferred to Aga Khan University Hospital for the best care. Although the hospital’s welfare department had funded 40 percent of my hospital bills, I still had to pay the bill for the remaining 60 percent.  My father and brother quickly assembled all the money they could by selling our only buffalo and borrowing money from relatives in order to pay for the surgery and hospital bills. My cousin sacrificed his wages to give me support during my hospital stay in addition to contributing to the medical expenses. Ten days after the surgery, I was discharged and sent home with a bag attached to my abdomen. My father took care of me when my cousin had to go back to work.

I had come to Karachi with hopes of supporting my family. My dream was to relieve my father and brother of financial worries and to see my mother and younger siblings laugh and live without any worries. Unfortunately what happened was the opposite. After my illness, my family has fallen into even worse financial troubles. Due to the expensive hospital bills we are now deep in debt. Even though I yearn to resume employment and provide for my family, my current state does not allow me to even walk properly, let alone secure a job. My sudden illness all those months ago has left me with daily pain, shattered dreams and a constant state of panic about the future. Sometimes I hope this is a dream, and that I will wake up and resume my job, but I know it isn’t.

I thought I had developed this disease due to weakness, but now I know it is a germ which transfers through contaminated food and water. Now I will be very careful and will tell my siblings and cousins to avoid unhygienic food and water. I would not have suffered this much pain and distress, and we would not have had to spend so much money on treatment, if I had known about this disease and how to prevent it.

Typhoid fever, a bacterial infection spread through contaminated food and water, affects more than 21 million people and causes an estimated 220,000 deaths every year. Together, typhoid, paratyphoid and non-typhoidal salmonella cause nearly 1 million preventable deaths per year. New typhoid conjugate vaccines are currently being assessed for pre-qualification by the World Health Organization, an important step towards making typhoid vaccines accessible and affordable for people in typhoid-endemic regions. This post is part of Stories of Typhoid, a series sharing the impact of typhoid on families in endemic countries.

Attaullah Baig is a Research Specialist at the Aga Khan University in Pakistan.