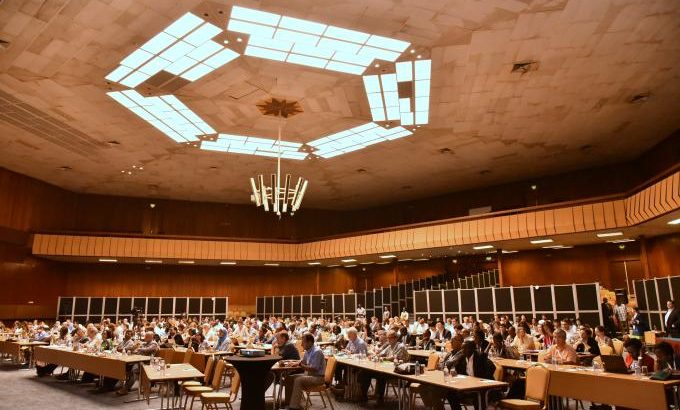 More than 300 researchers from 45 countries gathered in Kampala, Uganda in early April for the 10th International Conference on Typhoid and Other Invasive Salmonelloses. Hosted by the Sabin Vaccine Institute’s Coalition against Typhoid, the three-day conference – the world’s only such meeting devoted to the diseases – centered on the theme “From Evidence to Action” as attendees reviewed crucial developments to reduce the global burden of these diseases.

Typhoid fever, a bacterial illness transmitted through contaminated food or water, remains a significant public health threat in many low- and middle-income countries, particularly in Africa and Asia. Approximately 21 million cases occur annually worldwide, killing an estimated 220,000 people, most of them children. Although typhoid vaccines have existed for decades, currently available vaccines are underutilized and have significant limitations. With antimicrobial resistance on the rise, there is an increasing need for new vaccines and improved treatments. This year’s conference provided an opportunity for researchers, policy makers and advocates to gather and discuss recent progress and ongoing challenges, and identify ways to address these factors and reduce the global burden of typhoid.

The global health community is well-positioned to achieve typhoid control worldwide. Anita Zaidi of the Bill & Melinda Gates Foundation opened the conference’s first session by encouraging attendees to recognize their ability to change the status quo. Zaidi highlighted that many countries have eliminated typhoid as a public health concern, and estimates of the global burden of typhoid have remained relatively steady in recent years. This progress has helped identify key areas of work and a pathway forward to achieve sustained reduction in typhoid by 2035.

Uganda, the host country of the 2017 conference, is one example of where progress has been made in the effort to control and prevent typhoid. Uganda’s Minister of Health, Dr. Jane Ruth Aceng, spoke of recent advancements during Sabin’s reception on the first night, where she was the featured speaker. Following typhoid and nontyphoidal salmonella outbreaks in Uganda in recent years, Dr. Aceng praised a “robust disease surveillance and response system” that the Ministry of Health developed to stay ahead of future outbreaks.

Denise Garrett, vice president of typhoid projects at Sabin and director of the Coalition against Typhoid, heralded partnerships as one of the most effective ways to reduce the burden of typhoid. “It is not just one researcher or just one group that will make a change,” said Dr. Garrett, emphasizing that it takes a village to reduce the burden of these diseases. During the conference, Dr. Garrett welcomed the Typhoid Vaccine Acceleration Consortium, also known as TyVAC, to that village. TyVAC is a partnership between the University of Maryland, the Oxford Vaccine Group, and PATH, funded by a $36.9 million grant from the Bill and Melinda Gates Foundation. The group will collaborate with governments and policy makers to advance typhoid vaccine introduction around the world.

Although progress was celebrated throughout the conference, many of the sessions focused on tackling some of the greatest challenges facing the typhoid community. As Sabin’s President of Global Immunization, Bruce Gellin, stated in his welcoming remarks that in some ways a “perfect storm is brewing.” Challenges detecting, controlling and preventing typhoid are converging, creating added urgency for improved practices and technologies. Several researchers have spent the recent years evaluating the global burden of typhoid and spoke to the persisting social and data inequities between low- and high-income countries. The findings revealed that whereas high-income countries have seen a decline in typhoid cases following increased access to safe water and robust data, many low-income countries are still working to improve sanitation and improve surveillance, among other factors.

Researchers are currently trying to close the surveillance gaps all over the world, especially in the two regions most significantly burdened by typhoid and nontyphoidal salmonella: Asia and Africa. Sabin is working to improve surveillance fill knowledge gaps in Asia through the Surveillance of Enteric Fever in Asia Project (SEAP). Preliminary results from SEAP’s multi-country, multi-site, population-based surveillance were shared during the conference, shedding light on the impact of enteric fever in the region. Similarly, the International Vaccine Institute is leading typhoid surveillance efforts in Africa through their Severe Typhoid in Africa Program (SETA). SETA’s latest findings will help inform the introduction of typhoid vaccines in Africa.

Many presenters also addressed the threat of increasing rates of antimicrobial resistant typhoid and nontyphoidal Salmonella, which complicates treatment and control efforts. As typhoid strains develop resistance to first-line treatments such as the antibiotics ciprofloxacin, azithromycin and ceftiraxone, health providers are forced to rely on more expensive and less readily available antibiotics to treat the illness. These challenges are exacerbated when there are outbreaks of antibiotic-resistant typhoid, which is currently playing out in an ongoing outbreak of ceftriaxone-resistant typhoid in Hyderabad, Pakistan. Led by Farah Qamar of Aga Khan University, who is also a Principal Investigator for Sabin’s Surveillance of Enteric Fever in Asia Project, a team was formed to investigate the Hyderabad outbreak after it was detected in late 2016. As part of its investigations, the team has acquired special permission for a shipment of typhoid conjugate vaccines from Bharat Biotech International Ltd., an Indian biotechnology company, as an outbreak control measure. The team would use these vaccines to assess the impact of typhoid conjugate vaccine immunization on the control of an antibiotic-resistant typhoid outbreak.

Typhoid conjugate vaccines, like those under consideration for outbreak control in Pakistan, were a promising point of discussion throughout the conference. The typhoid conjugate vaccines in the pipeline have the potential to reshape global strategy for typhoid fever, with longer duration of protection, the ability to protect young children and the potential for delivery with other vaccines in routine immunization of infants. Additionally, several researchers shared findings that these vaccines would be cost-effective in certain Asian and African countries when implemented strategically. If these vaccines are prequalified by the World Health Organization (WHO), they have the potential to dramatically reduce the burden of typhoid around the world and, consequently, help to prevent the occurrence of antibiotic resistance.

From new typhoid conjugate vaccines to antimicrobial resistance and everywhere in between, the 10th International Conference on Typhoid and Other Invasive Salmonelloses enabled researchers from around the world to not only share the latest data but also discuss how to turn this evidence into action. As Adwoa Bentsi-Enchill of the WHO stated in the conference’s final session, data have long been major drivers of vaccine introduction demand and acceptability in countries. Data shared at the conference are already driving change: findings presented at the conference will inform discussions at the WHO later this spring, when experts gather to review recommendations on the use of typhoid vaccines. Changes to these recommendations could reshape global strategy on typhoid fever and come as early as next year.

The next International Conference on Typhoid and Other Invasive Salmonelloses is anticipated for 2019. Sign up for the Coalition against Typhoid’s newsletter to stay tuned for more information about upcoming typhoid conferences. For photos, presentations and other resources from the conference, please visit the Coalition against Typhoid’s website.

Hannah Bassett is a communications associate at the Sabin Vaccine Institute.