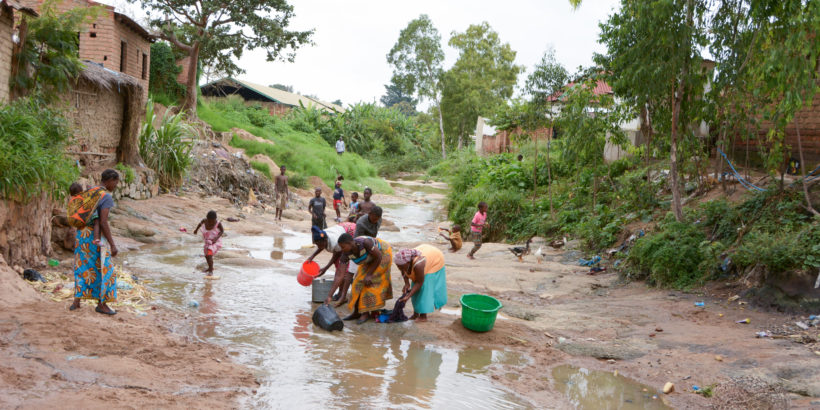 My work takes me to low-income urban communities all over the world, from India to Ghana, wherever possible fecal contamination could lead to the rise of diseases that sicken or kill. That’s because I work on the SaniPath project, an assessment which aims to increase the evidence base available to sanitation policy makers and implementers in low-income urban communities. It is designed to assess public health risks related to poor sanitation and to help prioritize sanitation investments based on the exposures that have the greatest public health impact.

Working on the SaniPath project leads me to see the worst of waterborne and foodborne diseases like typhoid. Typhoid is a devastating disease that disproportionately affects the poor and vulnerable in low- to middle-income countries. Recently, considerable advances in typhoid vaccines have led to the prequalification of the first typhoid conjugate vaccine (TCV) by the World Health Organization (WHO) and a commitment of $85 million in funding for TCV introduction in endemic countries.

But we need more than vaccines to eliminate typhoid in the poorest areas. Typhoid requires an integrated approach that includes new vaccines as well as water, sanitation and hygiene interventions. There are many extraordinary benefits of improved water, sanitation and hygiene. One of them is that, when we use them to prevent typhoid, they could also prevent multiple other waterborne and foodborne diseases like cholera and dysentery. By integrating interventions, we can maximize impact, reduce costs, and get more bang for our buck.

Preventing typhoid is personal for me. In 2012, I had a family member who contracted and suffered from multiple bouts of recurrent typhoid for about two years. Her business as a trader took her across West African cities and slums, exposing her to unhygienic food and unclean water, which led her to her first typhoid diagnosis. To try to avoid having typhoid again, she was advised to stay away from street food, only eat hot food and drink boiled or bottled water. Although she strictly abided  by these rules, she still ended up back in the hospital multiple times with typhoid. Complicating matters, some of the hospitals might not have correctly diagnosed her. Finally, she decided to stop trading in areas with high rates of typhoid and stopped contracting the disease. Her story shows us that effective typhoid prevention requires a multi-disciplinary approach. It also requires us to know much more about typhoid and how it is transmitted in poor urban areas. We need to identify all the relevant transmission routes, or exposure pathways, of typhoid to determine where and how to effectively intervene and prevent typhoid transmission.

The SaniPath approach looks at multiple fecal-oral transmission pathways. For example, our experience from Accra, Ghana showed that local produce had high levels of fecal contamination and posed a greater risk of exposure to fecal contamination than municipal drinking water, meaning that a person living in Accra might need an intervention focused on food safety more than a water-based intervention in order to prevent typhoid. In other places where typhoid is endemic, the opposite might be true.