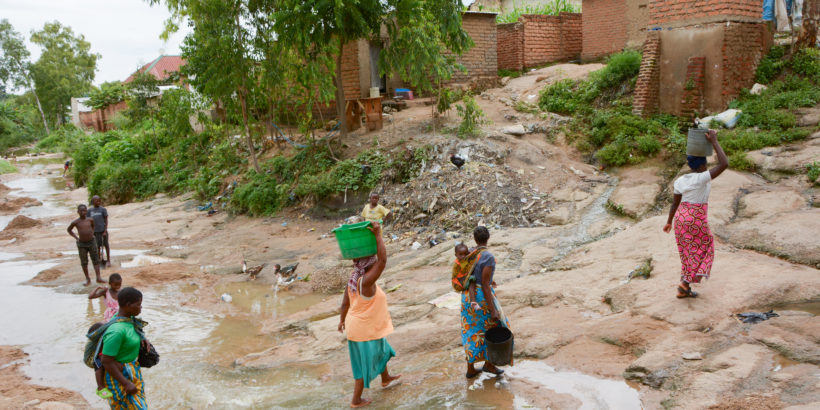 A drizzly afternoon and time to head home. Glancing out the window, my heart sinks – a major delay is in the works: Torrents of water carrying market detritus push past the gate of the Ndirande clinic, where I work in Malawi. During the rains, flash floods are common here, where municipal sewer and drainage systems have yet to extend. an ideal setting for the spread of enteric pathogens, including Salmonella enterica serotype Typhi (S. Typhi), the causative agent of typhoid fever. Globally, S. Typhi primarily affects the urban poor – either as an endemic condition in cities throughout Asia or as cyclical epidemics, including one affecting southern Africa for the past several years. This recent epidemic is attributed to the emergence of a drug-resistant strain of S. Typhi – no doubt enabled by crowded, urban settings like Ndirande that are ripe for spread of enteric infection.

Rapid expansion of Blantyre’s urban periphery has outpaced the municipal authorities’ ability to deliver sanitation services or ensure a constant supply of piped water throughout the city. The result is widespread water rationing that hits the informal settlements hardest. Intermittent flow and leakage makes piped water systems vulnerable to external contaminants – chief among them sewage.

The problem is exacerbated by the city’s topography with its rocky terrain, underground streams and shallow brooks – the latter also serve as unprotected sources of household water when pipes run dry. Small lots and high rates of tenancy (over 50% in Ndirande) work against construction of improved toilets in households. A standard pit latrine – 3 meters deep and designed for ten years of use – is hard to dig in rocky soil and fills up quickly in crowded households. Landlords have little incentive to invest in new toilets in a market based on high-occupancy and cheap rents.

Water, sanitation, and hygiene (WASH) interventions simply aren’t being scaled up fast enough to control S. Typhi in places like Ndirande – an urgent priority given high rates of multi-drug resistant infections, which could acquire further resistant mutations over time and become difficult to treat with available antibiotics.

A thought for World Toilet Day

Despite the promise held by new typhoid conjugate vaccines, a future free of typhoid fever is unlikely without good toilets (and clean water) as part of the solution. Chronic carriage of typhoid – with its hallmark persistent bacterial shedding in stools – affects two to five percent of infected individuals. The contribution of chronic carriage to S. Typhi transmission in settings like Ndirande is unknown, but if substantial, means vaccination alone may be insufficient for disease elimination.

Reducing the burden of all enteric illnesses is essential to improve community health and maintain the public’s confidence that vaccination works to prevent enteric diseases. On this World Toilet Day it is important that we acknowledge the critical role that access to improved sanitation plays alongside immunization to create healthier communities.