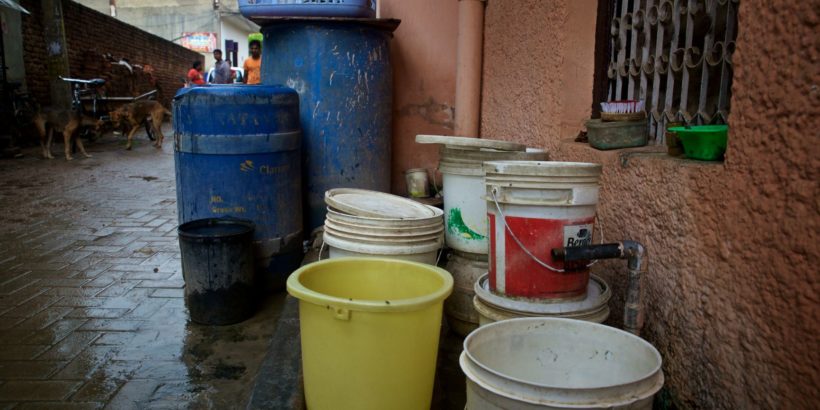 The highest incidence of typhoid is observed in urban slums, which are settlements or city regions that lack the basic infrastructure and living conditions for people to live in safe, healthy environments. These urban slums are growing. Between 1990 and 2012, the number of urban slum residents in Asia increased by 100 million. Asian cities are projected to grow by 1 billion people from 2015 to 2040, with many of those 1 billion people living in urban slums, putting an unimaginable burden on already constrained resources.

The spread of typhoid in these communities is linked to their intermittent water supply. Commonly, urban slum communities receive piped water for a couple of hours during a few days a week. When the water supply is turned off, the pressure in the pipes drops, allowing materials in the environment around the pipes to leak in. These materials often include untreated feces that can carry Salmonella Typhi, among other bacteria and harmful pathogens. This process efficiently distributes infectious doses of Salmonella Typhi throughout the community.

Typhoid was controlled in cities in North America and Europe in the late 19th and early 20th centuries by construction of centralized water treatment and distribution systems that provided a continuous water supply to all city residents. After more than a century, this approach has not been successfully implemented in cities in low- and middle- income countries. Important barriers include cost of construction, complexities of management and repair, and political disincentives to invest in quality services to poor communities. Instead of waiting for the 19th century approaches developed in wealthy, water-rich cities to reach high-need low-resource communities, we should prioritize investing in research to develop innovative 21st century technology and management approaches to this complex unsolved problem.

Improving community water systems is important, but it cannot be accomplished soon enough to protect against the incipient threat of Salmonella Typhi that is resistant to all available antibiotics. The new typhoid conjugate vaccine confers protection to younger children, as well as provides longer-lasting protection than prior vaccines.

While we continue to work towards a definitive solution that brings consistent water supply to urban slum communities, the typhoid conjugate vaccine provides an important immediate step towards healthier families.

Read more on this topic in the author’s article, “Urban Slums: A Supportive Ecosystem for Typhoidal Salomnellae”