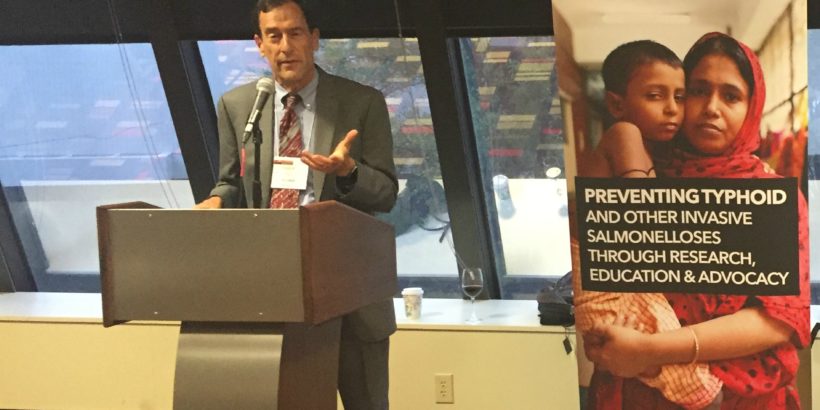 Every year, the American Society for Tropical Medicine and Hygiene (ASTMH) annual meeting brings together the brightest minds from around the world to share the latest research on tropical medicine and global health. The Coalition against Typhoid (CaT) was among the global health professionals gathered in Atlanta, Georgia, from November 13-17 to share information and promote action on typhoid.

Symposium: “Bridging the Gap towards Defining the Burden of Typhoid in Sub-Saharan Africa and Southeast Asia.”

Typhoid was on the agenda at ASTMH with a high-level symposium called “Bridging the Gap towards Defining the Burden of Typhoid in Sub-Saharan Africa and Southeast Asia.” The symposium, co-chaired by Rob Breiman of Emory University and Anita Zaidi of the Bill & Melinda Gates Foundation, featured five typhoid experts, including CaT Director Denise Garrett.

Defining the burden of typhoid is an important step towards prevention and control. John Crump, McKinlay Professor of Global Health at the University of Otago, opened the symposium by sharing the current knowledge of the typhoid burden as well as pointing out significant knowledge gaps. To fill these gaps, there are two typhoid surveillance programs currently collecting data: the Surveillance of Enteric Fever in Asia project (SEAP) and Severe Typhoid in Africa (SETA) program. Denise Garrett, from the Sabin Vaccine Institute, presented on SEAP, which is currently underway in Nepal, Pakistan and Bangladesh. Florian Marks, from the International Vaccine Institute, also spoke and discussed SETA which is active in multiple African countries. These surveillance programs aim to shed light on the impact of severe enteric fever including incidence, mortality, complications and economic impact.

Two other symposium speakers, Jeff Stanaway from the Institute for Health Metrics and Evaluation and Adwoa Bentsi-Enchill of the World Health Organization, expounded on the possible utility of the data collected by these typhoid surveillance programs. Stanaway presented ways the SEAP and SETA data can be extrapolated to serve a regional and global context. This data will also play a vital role in informing upcoming policy decisions. Benti-Enchill explained the impact this data could have on the WHO’s position paper regarding the usage of typhoid vaccine, which is due to be revised in 2017. This important paper will influence decision-makers like Gavi, Ministries of Health and other stakeholders around future investment in typhoid prevention and control.

Reception: “A Time for Action.”

Bringing together the typhoid community at the conference, CaT hosted a reception titled “A Time for Action” featuring remarks from the top minds in typhoid and invasive salmonelloses.

In her opening remarks, Denise Garrett spoke about the growing momentum in the fight against typhoid, a sentiment echoed by Steve Luby, professor of medicine at Stanford University, during his remarks. Luby emphasized the multiple reasons for the growing urgency to control and prevent typhoid. Increasing migration from rural to urban areas in Asia and Africa is putting stress on the already fragile water and sanitation infrastructure found in slums and mega-cities. Additionally, growing antimicrobial resistance is an “acute crisis” that needs to be addressed. Forthcoming, new conjugate vaccines that can protect infants and last longer could be a promising solution.

Vaccine solutions, however, need to be paired with water, sanitation and hygiene (WASH) interventions, said Eric Mintz, team lead of the Global Water, Sanitation and Hygiene Epidemiology Team at the Center for Disease Control and Prevention. Mintz noted that global health professionals are now, more than ever, seeking integrated solutions for waterborne diseases. “Both vaccines and WASH,” said Mintz, “have the greatest impact when accessed by the most vulnerable.”

With momentum and evidence growing, communication and illustration of the impact and scope of typhoid is needed to spur the world to action, remarked Rob Breiman. “We need to see the risk to build the will to act.”

Although the typhoid community has a long way to go in building the willpower to take action, the world is steadily becoming more aware of typhoid’s burden. Samir Saha, executive director of the Child Health Research Foundation gave the reception’s closing remarks. He noted that only a few years ago, conferences like the ASTMH annual meeting would not be shining such a bright light on typhoid. The typhoid community, Saha told the crowd, needs to continue driving this new era in treating and preventing typhoid into 2017.

Sarah Lindsay is a manager at the Sabin Vaccine Institute.