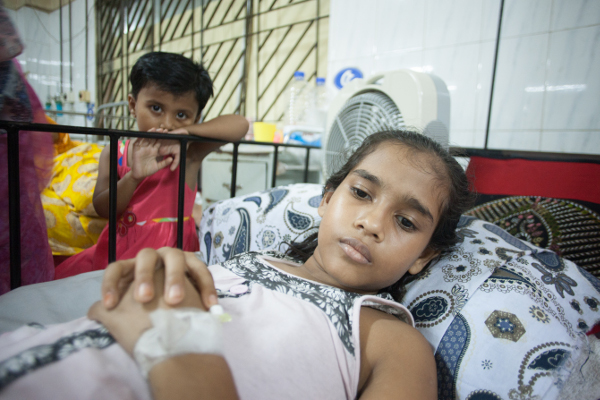 Meet Nurunnahar. Like many grade-schoolers around the world, this Bangladeshi nine-year-old girl thought she would cool off from the heat of the summer with a glass of lemonade.

But this drink, purchased from a street vendor, came with serious consequences. Within a week, Nurunnahar would develop a fever that rapidly reached a temperature of 104 degrees Fahrenheit. Day by day, she became weaker and the aches and cramps that plagued her grew more painful. By the time her parents checked her in to the hospital, Nurunnahar had lost her appetite and could hardly swallow food or drink. It had been a week since she had become sick. It would be another week before she could return home.

After providing vital intravenous fluids and nutrients, the hospital ran a blood test on Nurunnahar. The diagnosis? Typhoid, a vaccine preventable bacterial infection.

Nurunnahar’s parents, who had been staying by their daughter’s side in the hospital every day since she was checked in, were shocked to learn the diagnosis. Although they did not have a filter at home, they always boiled the water they used for drinking and cooking. But the doctors did not think the illness had come from inside her family home, but rather from the street. Lemonade bought off of the street is often mixed with ice made with contaminated water. As the ice melts, typhoid bacteria is released into the lemonade and ingested by children like Nurunnahar.

Nurunnahar was able to return home shortly after receiving proper medication and treatment. Since her release from the hospital, Nurunnahar struggled to catch up on her missed schoolwork from her two week absence, and her parents cautiously returned to their usual routines.

Of the estimated 26.9 million cases of typhoid a year, children like Nurunnahar account for the majority.  Nurunnahar’s story illustrates the challenges that parents face in trying to protect their children from typhoid. Even when parents can control the quality of the family’s water or food at home, they cannot control the risk factors that their children might encounter on the street. Boiling water and following proper handwashing procedures are incredibly important to stopping typhoid, but they cannot eliminate the risk by themselves. That is part of why vaccination programs are so well-received in typhoid endemic areas. The soon-to-be-available typhoid conjugate vaccine can be a simple, cost-effective prevention tool that keeps children healthy—so that children like Nurunnahar can enjoy simple childhood pleasures like a glass of lemonade.