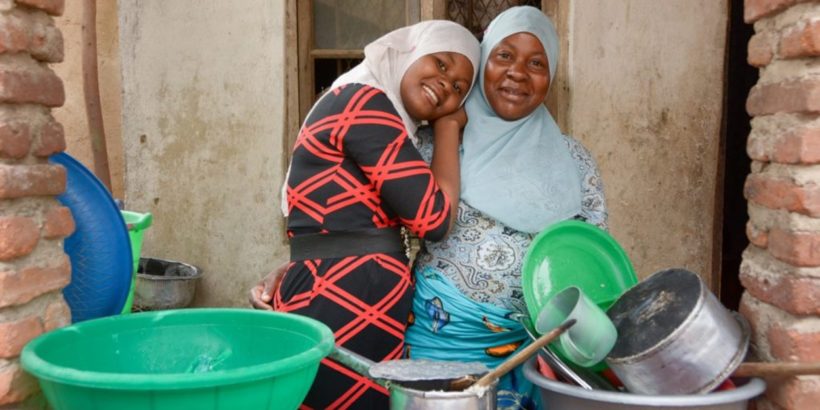 But too often, women and girls bear the brunt of inadequate health systems and lack access to care. These stories of how typhoid impacts women and girls help illustrate the long-reaching harms of gender inequity in health.

“I love to go to school. I wonder when I will start going to school again?” – 9-year-old Nishita, Bangladesh

Nishita is a nine-year-old who wanted to go to school so badly that she read her textbook alone by the light of the window in her family’s house. This Bangladeshi third-grader missed months of school after contracting a severe case of typhoid.

This same story happens in typhoid-endemic countries around the world. In Mukuru, Kenya, six-year-old Portia had to miss school when she fell ill with typhoid. Her mother Benta knew the dire consequences. 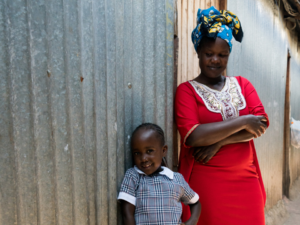 “Portia missed nearly two weeks of school. She missed so many lessons.” – Benta, mother in Kenya

Globally, children miss a total of 443 million school days due to waterborne diseases like typhoid. These missed school days not only impact the child’s future, but also a country’s economic growth.

While typhoid affects both boys and girls—and no child should miss school due to preventable illness—missed school can have a particularly detrimental impact for girls. Research demonstrates that for every 10% increase in female literacy, a country experiences 0.3% economic growth. Girls’ education has ripple effects for the next generation, too—a child born to a literate mother is 50% less likely to die before the age of 5.

The costs of illness hold women back

Poverty exacerbates the impacts of diseases. Financially struggling mothers and families have difficulty accessing good nutrition, proper sanitation, and health education and care. This becomes a vicious cycle for women; an illness such as typhoid often has a disproportionate impact on women’s finances and, subsequently, their families’ socioeconomic status.

Judith, a mother in Mukuru, Kenya, washes clothes for a living. When her three-year-old son Jackson fell ill with typhoid, she had to quit working to take care of him. This forced her to make impossible decisions between her son’s health and basic necessities. 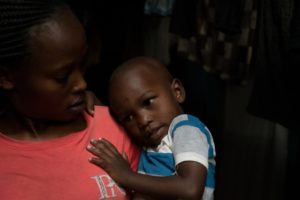 “I had a lot of stress. When he was sick I couldn’t go out and look for work. Even eating was difficult because I didn’t have money.” – Judith, mother in Mukuru, Kenya pictured with her son Jackson

When a family member falls ill, mothers, grandmothers, or older sisters are most likely to be the caregivers, often resulting in missed school, work, and income. When illness happens repeatedly or for a long period, women’s careers and future job prospects can be seriously diminished.

In Makata Ndirande, Malawi, 27-year-old Martha was unable to run her small business while Thapelo, her young daughter, was sick, and it took nearly two months of hard work to recover those lost wages.

Young mother Hazielat had to interrupt her own education and her mother’s income when she fell ill with typhoid. Because she was unable to look after her two-year-old daughter Patience while ill, Hazielat’s mother became the primary caretaker for both Hazielat and Patience. Her mother was only able to return to her small business after Hazielat finally received the proper treatment and recovered. 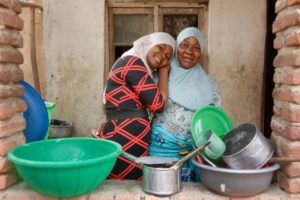 “My mother’s life literally stopped because she had to be there looking after me at all times.” – Hazielat, pictured with her mother Mercy in Ndirande Township, Malawi

Preventing illness by investing in vaccination, safe water and sanitation, and stronger health systems will strengthen the financial and overall health of women, families, and economies. And conversely, investing in the financial empowerment of women will improve health. According to the World Bank, when we encourage girls to earn a living, they invest 90% of their income back into their families—more than twice as much as men.

Gender-equitable leadership prioritizes the needs of families and children

The many women leaders in typhoid research and prevention illustrate the fact that when women are in leadership positions, they prioritize the needs of families and children. Leaders such as Dr. Anita Zaidi and Dr. Kathleen Neuzil have been driving the effort to increase access to typhoid conjugate vaccines, a game-changer for preventing typhoid in children. 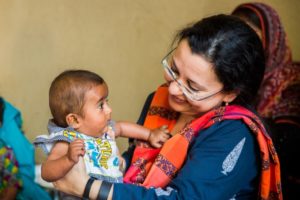 “One thing I deeply believe is progress for women means progress for everyone. There is a very simple phrase that we’ve been using internally, which I love, so I’ll use that. ‘Equal is greater.’” – Dr. Anita Zaidi, typhoid champion and president of the Gender Equality Division, Gates Foundation (quote from Devex interview)

Equal is greater. We have a long way to go achieve gender equity, but ensuring equitable access to health, including proven interventions such as vaccines, antibiotics, and water, sanitation, and hygiene, is an important place to start.