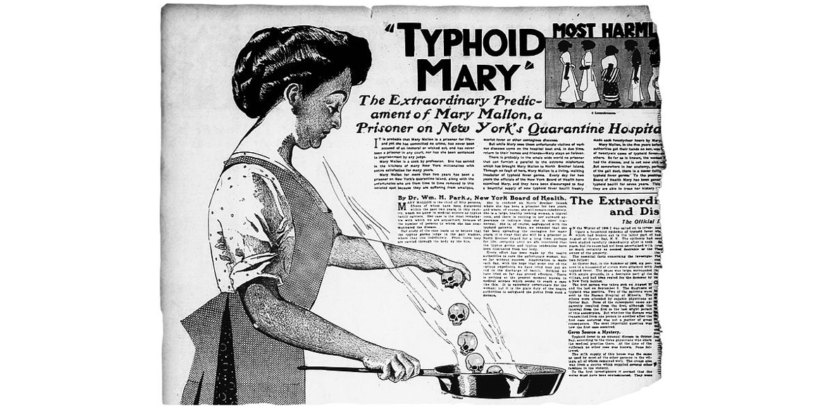 Everyone needs to wash their hands. That universal truth is something that Mary Mallon, also known as Typhoid Mary, unfortunately did not understand.

Mary was an Irish immigrant who migrated to the United States as a teenager in the 1880s. She worked as a cook for wealthy families in New York, and within two weeks of her first employment, residents of the house where she worked started to develop the symptoms of typhoid. She changed jobs several times, moving from household to household, leaving typhoid in her wake wherever she went.

Although she appeared to be in perfect health, a public health investigation identified Mary as the first person in the United States to be an asymptomatic carrier of Salmonella Typhi – the bacteria that causes typhoid. It is estimated that 1-6% of people infected with S. Typhi become chronic, asymptomatic carriers like Mary. The bacteria hides out in those people’s immune cells, causing no illness to the host but enabling the bacteria to replicate and shed through their feces.

In Mary’s case, this was especially problematic because of her role as a cook. Even though she felt fine, her feces was full of highly contagious typhoid bacteria. Like everyone, she got small, invisible amounts of feces on her hands when she used the restroom. She then used her hands to make food, spreading the bacteria as an unwanted ingredient into the food and mouths of the families for whom she cooked. Because the high temperatures of hot foods likely would have killed the bacteria, doctors linked her disease-spreading ability to one of Mary’s most popular dessert dishes: ice cream with raw peaches that she cut by hand.

The missing ingredient in this recipe for disaster? Handwashing.

Handwashing with soap is a simple, cost-effective way to prevent infections, especially those spread through the fecal-oral route, such as diarrhea and typhoid. Fortunately, we now have typhoid conjugate vaccines for prevention and antibiotics for treatment, but because these are not always available, handwashing is still a first line of defense.

Unfortunately, Mary did not believe the authorities when they told her that she carried typhoid, and she did not understand the link between the disease and handwashing. She evaded authorities for years, was in and out of isolation, changed her name and kept working as a cook, ultimately causing a typhoid outbreak at a hospital. It is estimated that Mary infected 51 people during the course of her career, three of whom died.

Typhoid Mary’s story is a tragic one, not only because people suffered and died, but because the solution was so simple. Mary should have washed her hands. While we now know enough to understand the importance of handwashing, preventable food- and water-borne infections, including typhoid, are still far too common. A large typhoid outbreak in Kampala, Uganda, in 2015, for example, was linked to contaminated beverages sold by street vendors. The science is clear: Everyone should wash their hands with soap, as frequently and thoroughly as possible.

Because of the link between hygiene and diseases, many countries, states, and local authorities have enacted policies that hold restaurants, food vendors, hospitals, clinics, schools, and other public spaces accountable for making sure their employees wash their hands. Policies can also help ensure that children are taught how to properly wash their hands from a young age, especially in school. These policies are lifesaving. Enacting them as part of integrated approaches for child health, alongside vaccination programs and policies to improve water and sanitation, is the best way to tackle not just typhoid, but many diseases in a comprehensive way.

Clean hands are a recipe for health, and in Typhoid Mary’s cooking, handwashing could have been a lifesaving ingredient. If she had thoroughly scrubbed her hands before preparing and making her famous peach ice cream, who knows? Maybe we’d be calling her ‘Peach Ice Cream Mary’ instead of Typhoid Mary.