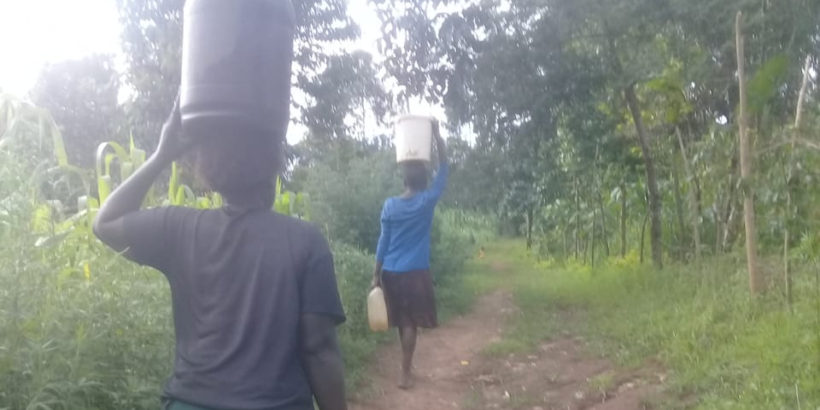 It is early morning in Tongaren, the village where I grew up in western Kenya. There, on my annual vacation, I meet eight-year-old Nanjala walking with her mum to the local health centre. I stop and give them a ride; her mother tells me Nanjala has had fever and abdominal cramps for three days. The diagnosis at the local health centre showed the likely cause: typhoid. Nanjala’s mum was on her way back to the health centre, a distance of five kilometers, to get medication. After dropping them off, I got to thinking about the tragedy that is typhoid.

As a child growing up in Kenya, I came to know typhoid as a common ailment in my village. In many rural villages, there were no labs to analyze the blood and diagnosis was based solely on clinical symptoms. Children with fevers were given anti-malaria medication. If there was no improvement, the health worker often prescribed antibiotics as they suspected typhoid.

Typhoid is caused by the bacterium Salmonella enterica serotype Typhi. Although contaminated food and water are considered the major risk factors for typhoid, a range of other factors have been associated with outbreaks in endemic settings such as poor sanitation, close contact with typhoid cases or carriers, proximity to contaminated bodies of water, flooding, and densely populated areas. In addition, climate conditions such as rainfall intensify the risks of typhoid transmission.

The majority of people in the village I left more than 30 years ago rely on water from unsafe and contaminated sources including the river and nearby streams. Women trek more than a kilometer to fetch drinking water; the same water used by livestock. This water is contaminated by human sewage.  Fewer than 15 percent of households in my village have improved sanitation. Poor sewage disposal leads to runoff, which eventually ends up in rivers and ponds. Water drawn from such rivers and ponds is rarely treated due to a lack of awareness and, to some extent, poverty and scarcity of fuel-wood to boil water. While it is likely most water is contaminated at the source, often there is re-contamination during collection, storage, and use at home. In the village, residents collect water from rivers in 20-liter plastic containers and store it in large pots for several days. A cup or tin dipped into the pot to draw drinking water is used by multiple people and rarely cleaned.

It is likely Nanjala contracted typhoid from contaminated water, but this is not the only possible source – contaminated food can also cause typhoid. Nanjala and her friends, like many other school children her age, often buy their lunch from food vendors. Contaminated street food has been identified as a cause of typhoid outbreaks in Uganda, Zimbabwe, and India.

The effects of typhoid in children like Nanjala extend beyond ill health. It translates into absenteeism from school as well as lost productivity for caregivers. There is further economic hardship as precious resources are used to purchase medicine, something that poor families who are the most vulnerable can ill afford.

There is great news for children like Nanjala – a new typhoid conjugate vaccine (TCV) was approved by the World Health Organization (WHO). In April 2018, the WHO recommended typhoid-endemic countries introduce TCV in a single dose for infants and children more than six months of age, accompanied by catch-up vaccination campaigns for children up to 15 years of age, where feasible. The Typhoid Vaccine Acceleration Consortium (TyVAC) is leading global efforts to take on typhoid. Hopefully countries will take advantage of this opportunity to combat typhoid and improve the lives of children like Nanjala.

Before I left the village, I reached out to Nanjala and her mum and gave them information to help prevent future cases of typhoid. My suggestions included preventative measures such as properly boiling water before drinking it and washing hands before eating. In addition to specific advice to Nanjala, I urge the Ministry of Health of Kenya to take advantage of the availability of TCV and introduce the vaccine in the country to help save lives.

Ken Simiyu is the Program Director for TyVAC at the Center for Vaccine Development and Global Health at the University of Maryland School of Medicine.