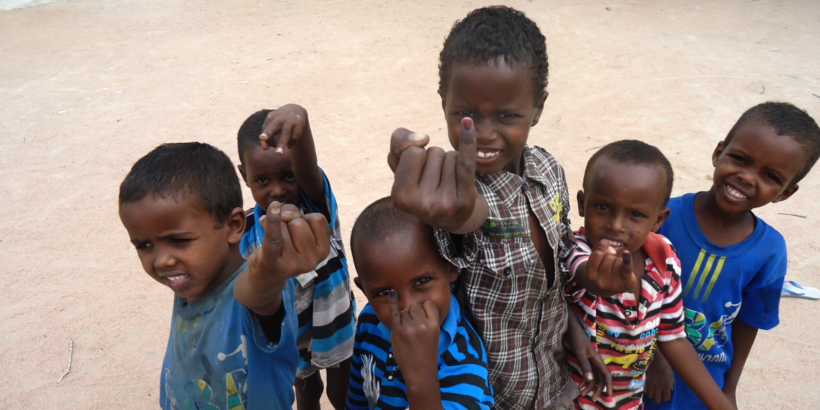 As researchers, doctors, policymakers, and advocates, we are all champions for the control and prevention of enteric fever and nontyphoidal Salmonella invasive disease. To effectively communicate the nuances of public health interventions from vaccine introduction to sanitation infrastructure, it is important that our words are accurate and consistent with the science of enteric fever and nontyphoidal Salmonella invasive disease. However, for the everyday typhoid advocate, some of the science can be pretty…well, science-y. That’s why we’re publishing this three-part blog series, “Back to Basics,” which takes a deeper dive into the fundamentals and nuances of the terminology we use and reference every day.

New tools such as typhoid conjugate vaccines (TCV) make it possible to achieve substantial progress on reducing typhoid fever illnesses and deaths. But could we be more ambitious? Could we think beyond ‘reduction in burden’ and think about typhoid elimination any time soon?

When thinking about longer term health goals it’s important to understand the difference between various terms. Disease control focuses on reduction of disease incidence, prevalence, morbidity, or mortality to locally acceptable levels through deliberate efforts. Elimination is defined as reduction to zero of infection or disease in a defined geographic area. Elimination in a defined geographic area is a step towards eradication, which means the permanent reduction to zero of incidence of an infection or disease worldwide. To date, only one disease has been eradicated—smallpox. Eradication is a prerequisite to extinction, where the infectious agent no longer exists in nature or the laboratory. The advantage of eradication and extinction is that continued intervention is no longer required for control, resulting in enormous future economic and health benefits.

There is great debate about whether typhoid elimination is possible, so I pulled together some key considerations and an update of where efforts stand today.

The first thing to consider is biological and technical factors. We need to ensure there is:

Where are we today? Safe water and food and improved sanitation have been ecologically associated with historic reductions in typhoid in Europe and the Americas. A World Health Organization-pre-qualified TCV that protects children as young as six months of age, and for longer periods of time when compared to older vaccines, is available and has support for introduction from Gavi, the Vaccine Alliance. Modelling efforts suggest that elimination is unlikely through vaccination alone and that the role of chronic carriers as a source for new infections represents a key epidemiologic uncertainty. In terms of diagnostic tools, typhoid is difficult to diagnose clinically. The current practical ‘gold standard’ blood culture test is expensive, requires specialized personnel and laboratory facilities, and is only 40% – 60% sensitive in identifying typhoid cases due to low levels of bacteria in the blood during illness. As such, blood culture is rarely widely available in settings where typhoid is endemic. Progress is needed on diagnostics for both infection and disease. We are quite confident that humans are the only reservoir for Salmonella Typhi, but elimination efforts for other diseases have demonstrated that dogma can be wrong, so it’s valuable to continue research on typhoid reservoirs until we are sure.

There are numerous fiscal and economic decisions to consider when weighing the priority of disease elimination, so it’s also important that we consider economic factors. Enteric fever is known to place a large financial burden on families and communities who are impacted by the disease, given expensive treatment costs and lost wages from missed work. Understanding this, two important considerations for concerted disease elimination efforts are: (1) other competing priorities within and outside the health sector, and (2) potential to align efforts for other diseases.

How does typhoid factor into theses considerations? For typhoid elimination, there are obvious synergies with other infections controlled by safe water and food and improved sanitation. However, when it comes to vaccines Salmonella Typhi is only one of several Salmonella serovars that cause serious infections in humans. The development of multivalent vaccines have potential to generate wider health impact, especially in parts of Asia where there is a high incidence of not only Salmonella Typhi, but also Salmonella Paratyphi A infection and in sub-Saharan Africa where nontyphoidal Salmonella invasive disease is often common. A multivalent vaccine with cross-protection that could cover almost all invasive Salmonella disease could strengthen the case for investment.

Lastly, social and political factors are important considerations. There are many to consider, including:

What’s the status of social and political commitments today? In 1993 typhoid was among many diseases screened for potential eradicability by International Task Force on Disease Eradication. At the time, political will to eliminate typhoid was determined to be ‘none.’ As other disease burdens shift, the prioritization of diseases can be rearranged, particularly in light of antimicrobial drug resistance, climate change concerns, and potential increases in burden. However, while improvements in biological and technical factors have occurred in the past two decades, a multi-level advocacy plan is needed to begin to engage with the numerous social and political obstacles to typhoid elimination.

A final key factor to weigh is whether or not a strategy has been demonstrated to be effective through field-testing in a defined area. Unfortunately, today there is no typhoid elimination strategy with formal evaluation of results or impact. Due to their small size and relative isolation, islands of Oceania have been leaders in efforts to control or eliminate a range of endemic neglected tropical diseases, including lymphatic filariasis, trachoma, and scabies. Some Pacific Islands experience endemic and epidemic typhoid and, where political and social will exists, may be suitable to lead such efforts for typhoid fever.

The road to elimination is long, hard, and fraught with challenges. While global efforts to eliminate several infectious diseases are underway, smallpox remains the sole example of successful eradication. It is important to remember that while elimination of typhoid may be a longer term goal, we must continue efforts to protect communities, reduce transmission, and grow the prioritization of resources for typhoid and TCV now, with the data and tools currently available.

Photo courtesy of Centers for Disease Control and Prevention/Adam Hassan