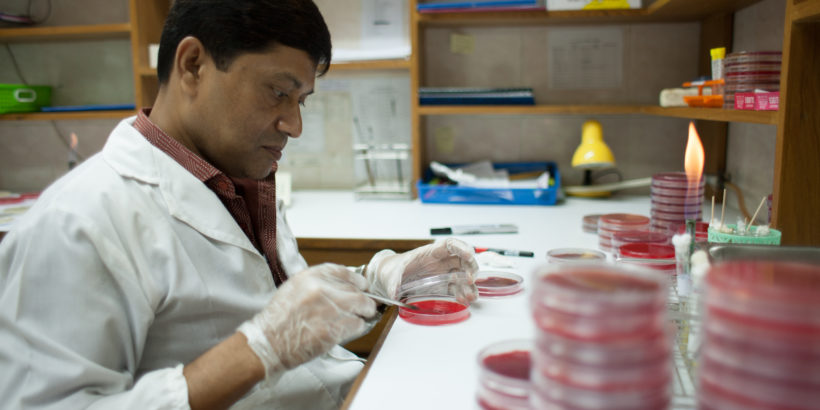 We are proud to announce that new data from Phase I of the Sabin Vaccine Institute’s Surveillance of Enteric Fever in Asia Project (SEAP) was published in November 2018 in the Journal of Infectious Diseases. The publication contains a retrospective review on the burden of typhoid at the SEAP sites in Bangladesh, India, Nepal, and Pakistan, as well as research and commentaries on the socio-economic burden of typhoid; the intersection of climate change, rapid urbanization and typhoid; and policy implications for typhoid control. This supplement builds upon the existing research on enteric fever in South Asia, and will help to inform prevention and control policies, including decisions on typhoid conjugate vaccine (TCV) introduction.

The data published in this supplement provided the groundwork and background data for the Phase II prospective surveillance now underway in Bangladesh, Nepal, and Pakistan.

Even with the limited nature of retrospective data, the team was able to elucidate important differences between the study sites. In particular, the team found that the burden of typhoid in Bangladesh and Pakistan concentrated in a younger age group than that in Nepal and India. The median ages of laboratory-confirmed cases in Bangladesh and Pakistan were 3 years and 7 years, respectively, while in Nepal and India the median ages were 19 and 24 years, respectively. The differences between Bangladesh and Pakistan and Nepal have been confirmed by preliminary results from SEAP’s ongoing prospective work, which also takes healthcare-seeking behavior into account.

The sites also found that a high proportion of typhoid cases in all study countries were drug resistant, or non-susceptible to ciprofloxacin and first-line antibiotics. As seen in the current outbreak of ceftriaxone-resistant typhoid in Pakistan, the need for TCV in these countries is greater than ever as resistance continues to grow and treatment options are dwindling. Despite the advancements made in reducing the prevalence of typhoid, such as increasing water and sanitation measures, drug-resistance is rapidly overshadowing advancements.

In addition to data on age distribution and drug-resistance,the sites collected data on severity of disease and complications of typhoid, helping to inform prospective surveillance. Surgical ward surveillance is currently ongoing and will expand the knowledge on the link between typhoid and ileal perforation, a hallmark complication of typhoid, which can result in death.

In the supplement, the SEAP study team shares a rigorous baseline image of typhoid burden of disease in Asia. With this data in hand, alongside ongoing prospective surveillance, the SEAP team is expanding its work to study new, scalable methods of estimating the burden of typhoid in communities. SEAP’s goal is to provide high-quality data to inform policymakers on the TCV introduction, leverage generated surveillance data to validate new typhoid diagnostics, and accelerate efforts to prevent and control typhoid.