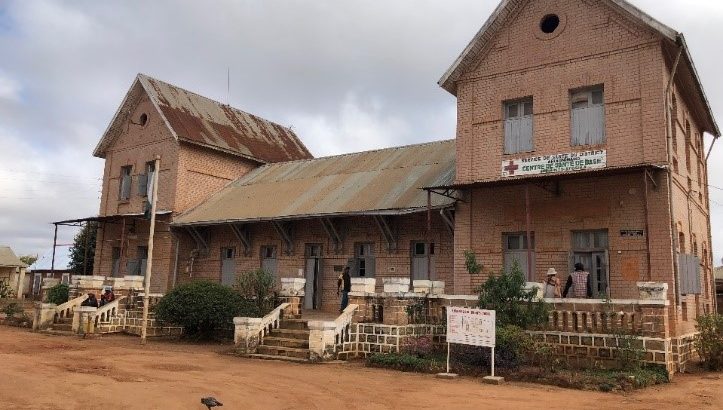 Madagascar is truly unique. Although it sits only 250 miles off the coast of East Africa, it feels like a world away. The fourth largest island on earth, Madagascar came into being when it broke off from the Indian subcontinent about 88 million years ago. During this period of isolation, Madagascar evolved into the biodiversity hotspot that it is today. Approximately 90 percent of its wildlife is found nowhere else on earth, including its iconic baobab trees and 50 distinct species of lemurs. The landscape is also striking in both its beauty and diversity; the island features more than 3,000 miles of coastline, rain forests, tropical dry forests, plateaus, and deserts.

However, this unique environment comes with its own challenges. As an island, Madagascar is particularly vulnerable to extreme climate and weather events—namely cyclones, floods, and droughts—and is expected to experience increases in temperature and sea level in the coming years. Each of these is likely to negatively impact water, sanitation, and health care infrastructure, and ultimately increase the risk for enteric, diarrheal, and vector-borne diseases. Currently, only 12 percent of the total population has access to improved sanitation, and that number is even lower in rural areas.

Access to health care facilities is also a major issue. Sixty percent of Malagasy people must travel more than five kilometers to a health center, often through difficult terrain. Upon reaching a health center, there is a critical shortage of skilled health care workers available to provide care. Low health care–seeking behavior observed in rural areas may be partially attributable to lack of access to facilities, frequent stockouts, and high costs associated with medical care. When one considers that more than 80 percent of the Malagasy population lives on less than US$1.90 a day, it’s clear why cost is a major deterrent to seeking health care.

As in many low- and middle-income countries with poor water and sanitation systems, typhoid remains a persistent health problem. Systematic blood culture surveillance was established in Madagascar through the Typhoid Surveillance in Africa Program (TSAP) and has continued through the Severe Typhoid in Africa (SETA) program. Both studies have demonstrated that typhoid fever incidence in Madagascar is high; published TSAP data showed an adjusted incidence rate of 171 cases per 100,000 population among children 5–14 years of age in a rural setting. Forthcoming data from the SETA program, which focuses on severe cases of typhoid, surface an additional dimension of the typhoid problem in Madagascar: given limited access to health care and high associated costs, many typhoid fever patients delay treatment until they progress to severe disease, resulting in ileal perforations and even death. If a multi-drug resistant or even an extensively-drug resistant strain were to be introduced into Madagascar, the results could be truly catastrophic.

In Madagascar, introducing typhoid conjugate vaccine (TCV) into the routine immunization program and conducting catch-up campaigns—which are supported by Gavi, the Vaccine Alliance—will likely result in significant reduction in disease incidence. Receiving a TCV could mean the difference between life and death for a child whose family cannot afford to pay for medical care. The relatively modest investment required to introduce TCV in Madagascar will result in more children being protected against a potentially deadly disease, which is critical in a setting where health indicators are poor, access to care is limited, and climate change and natural disasters continue to challenge an already strained health care system. Protecting children against typhoid also helps to keep children in school and saves parents the costs of medical care, transportation, and lost wages. Vaccinating children now and achieving high levels of coverage could also limit or prevent the spread of any potential future introduction of a drug-resistant strain of Salmonella typhi.

There is important work to be done to strengthen health systems in Madagascar, including improvements to water and sanitation infrastructure. This will require significant investment and political will. In the meantime, typhoid will continue to be a major problem in Madagascar—one that is unlikely to be eliminated in the short-term, particularly in the face of increasing drug resistance, rising water levels, and limited access to health care facilities. TCVs offer a near-term solution with the potential to save lives and reduce the incidence of typhoid. Introducing TCVs in Madagascar would not obviate the need for ongoing investments in the health system, but it would be the first step towards a comprehensive prevention and control strategy. Decision-makers are at an important pivot point for typhoid control in Madagascar and acting decisively before drug-resistance, climate change, or even natural disasters exacerbate the problem would have major health and economic impacts. An application for TCV introduction support and introduction planning can and should start soon to ensure that Malagasy children are protected against a potentially escalating threat as soon as possible.