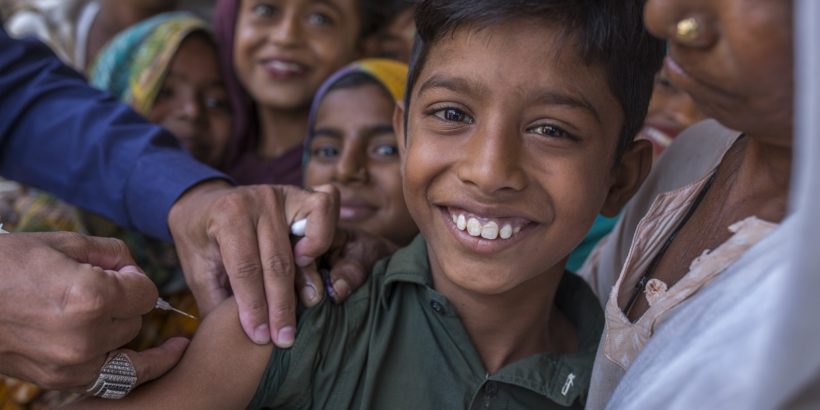 As we prepare to ring in the New Year, we want to take a brief moment to reflect on the monumental milestones we achieved to take on typhoid in 2018.

When this year started, fresh from the whirlwind of a new World Health Organization (WHO) prequalified typhoid conjugate vaccine (TCV) and a corresponding Gavi, the Vaccine Alliance funding envelope earmarked for TCV introduction, we knew TyVAC and our partners were primed for an exciting year. In March 2018, WHO officially recommended TCV for preferential use for all ages,especially in countries with the highest burden of typhoid or drug-resistant strains.

We leveraged the global momentum and quickly turned our focus to engage with national decision-makers about TCV introduction. In May 2018, TyVAC collaborated on Pakistan’s application to Gavi, the first submission under the new funding window. Later in the year, we worked with local National Immunization Technical Advisory Groups (NITAGs) and other leaders to support stakeholder meetings in several countries to discuss TCV introduction. As 2018 draws to a close, we continue to work with these stakeholders, and we are planning to work with additional NITAGs in new countries in the coming year.

In July, the Navi Mumbai Municipal Corporation (NMMC) in India began the first phase of their efforts to be the first in the world to introduce TCV into an immunization program. While the TCV has been licensed in India since 2013, the private market cost is too expensive for many families, especially for those at highest risk of typhoid. This campaign marks the first public-sector introduction of TCV globally and aims to vaccinate approximately 320,000 children aged 9 months to under 15 years.

During the past year, we witnessed ongoing typhoid outbreaks in Pakistan and Zimbabwe. Pakistan has been working to combat this outbreak for several years, a situation made all the more urgent by increasing cases of extensively drug-resistant (XDR) typhoid. XDR typhoid shows resistance to virtually all available treatments, including first line drugs, fluoroquinolones and third generation cephalosporins. The government, alongside key partners, introduced the newly prequalified Typbar TCV® to conduct outbreak response campaigns. In September, the 100,000th child was vaccinated as part of the response efforts, a huge milestone in the fight to curb the outbreak and protect children and their families.

Zimbabwe is similarly in the midst of an ongoing outbreak with frequent cases of drug-resistant typhoid being reported. TyVAC supported the drafting of Zimbabwe’s plan for TCV emergency response campaigns, which are planning to vaccinate more than 300,000 children and adolescents next year.

We can’t close the calendar on 2018 without acknowledging the incredible work happening at TyVAC’s four trial sites. In Bangladesh, Malawi, and Nepal, we have enrolled nearly 100,000 children inTyVAC studies. Just this month, we launched a fourth study in Burkina Faso. We are thrilled to be adding a new site in West Africa that will provide different data on the generalizability and co-administration of TCV with various vaccines used by Expanded Programmes on Immunization in sub-Saharan Africa. We anticipate that data from these studies will inform policy and vaccine introduction decisions.

Despite the enormous strides we have made this year, there are still challenges ahead. Increasing recognition of the widespread typhoid distribution and burden in children, ongoing outbreaks, lagging improvements in water, sanitation, and hygiene, and rising drug resistance are reminders that typhoid continues to be a substantial public health threat.

As 2018 comes to an end and we look ahead to 2019, there are many things about which we are optimistic; we have a WHO prequalified TCV in our toolbox and funding support from Gavi. We have new data about TCV effectiveness on the horizon, and we are poised to work with many more countries in the year ahead. We look forward to continuing work together next year, redoubling our efforts to reach more families and communities with TCVs.