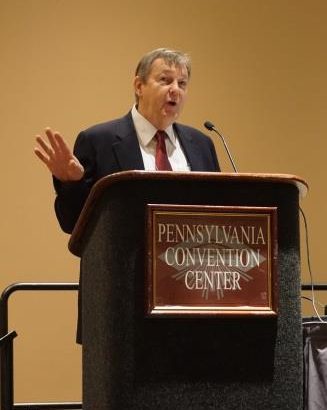 On Tuesday, October 27, the Coalition against Typhoid (CaT) Secretariat hosted a symposium at the 64th Annual American Society of Tropical Medicine and Hygiene (ASTMH) Meeting in Philadelphia, Pennsylvania. The symposium, entitled, “Typhoid Fever Vaccine Use in Developing Countries: An Analysis of Existing Data and Strategy Development for the Future,” explored developments in the enteric fever space and was co-chaired by Duncan Steele of the Bill & Melinda Gates Foundation and Dr. Denise Garrett, director of CaT.

Dr. Garrett kicked off the symposium with her presentation on the Surveillance for Enteric fever in Asia Project (SEAP). SEAP is a prospective surveillance project designed to describe the burden of enteric fever in Asia, generate data to inform global policy recommendations and facilitate typhoid vaccine implementation in endemic countries. As the principal investigator for the project, Dr. Garrett discussed the study’s prospective methods and the retrospective results from Bangladesh and Pakistan. These results showed the continued burden of typhoid fever in South Asian countries, as well as the need for thoughtfully-designed prospective studies to standardize and better quantify the true burden of illness and severity. The need for sustainable surveillance to guide public health decisions and measure the impact of prevention and control efforts was also highlighted.

Paul Arora from The Centre for Global Child Health, Hospital for Sick Children and the Dalla Lana School of Public Health presented data from his Trends in Typhoid (T2) Project. His presentation explored the pressing need for typhoid trend data in low and middle income countries. To fill this gap, the T2 Project is conducting a systematic literature review and developing country case studies.

Yale School of Public Health’s Virginia Pitzer addressed herd immunity and cost effectiveness of Vi conjugate vaccines. Her mathematical model, which incorporates the indirect protection of herd immunity, considers the dynamic changes within populations that influence infection rates. This model projected the impact of a typhoid vaccine and analyzed the cost effectiveness of routine vaccination at varying levels of typhoid burden.

Vittal Mogasale from the International Vaccine Institute (IVI) also discussed the intersection of typhoid and economics. His remarks explored the direct and indirect costs of typhoid, and demand for Vi conjugate vaccines at the global level. Using incidence rates, hospital costs and GDP per capita, as well as a decision tree mapping typhoid treatment, Dr. Mogasale concluded that the estimated typhoid cost to the world was more than $1 billion in 2010, between treatment and loss of productivity due to infection. Based on forecasting methods, Dr. Mogasale also showed that, if assumptions on vaccine introduction are correct, vaccine demand will spike in 15 years starting from 2020.

Duncan Steele rounded out the symposium with an overview of typhoid vaccines and an update of vaccines in the pipeline. He explained how the current vaccines – Vi polysaccharide (ViPS) vaccines and the live attenuated Ty21a vaccine – have demonstrated efficacy and acceptable feasibility in mass vaccination campaigns with public health impact. However, the vaccines are not widely used in public health programs due to the modest efficacy (50-70%), waning protection after 3-5 years, and inability to use the vaccines in children under 24 months of age. The Vi-conjugate vaccines under development could improve upon the immunization coverage achieved by inclusion in routine immunization schedules in infants, with longer term protection likely. However, many obstacles remain before full adoption. Moving forward, Steele recommended a combined vaccination and water, sanitation and hygiene (WASH) approach in combatting typhoid fever.

The symposium concluded with remarks from SEAP’s co-principal investigator, Kashmira Date of the Centers for Disease Control and Prevention (CDC). Dr. Date highlighted the potential of the presented data for the future of typhoid prevention and control. Armed with surveillance data generated from SEAP and other translational research, the Coalition against Typhoid will continue to advocate for the implementation of the typhoid conjugate vaccine and other primary prevention efforts – safe water, sanitation and hygiene, in endemic and outbreak settings across the world.

Cara Katrinak is an intern at the Sabin Vaccine Institute.