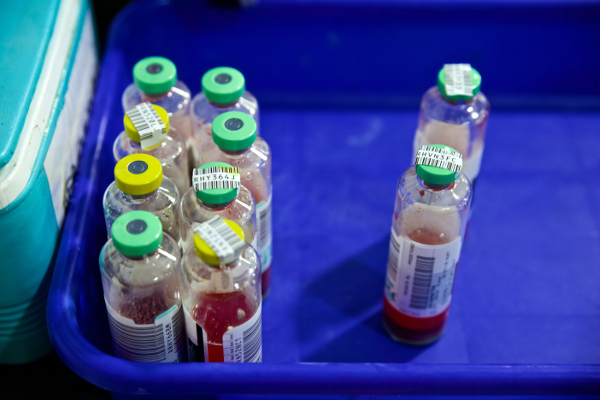 After struggling with outbreaks for more than a year, Zimbabwe is facing yet another deadly wave of typhoid as it begins the new year. Hundreds of cases have been reported across the country over the past three months, the vast majority of which have occurred in Harare, Zimbabwe’s capital city, where the local government struggles to provide clean water and to collect sewage. Because typhoid is spread through contaminated food and water, the lack of these basic services means that typhoid bacteria can easily spread throughout the city. Although there are two vaccines for typhoid on the market, both of which have proven safe and effective, they are not readily available to Zimbabweans, even those that live in high-risk areas.

As this most recent typhoid outbreak has spread, Harare residents have been vocal about blaming local government for the resurgence of typhoid, accusing the Harare City Council of allowing a total breakdown in the delivery of services like clean water and sewage treatment. Some doctors have even suggested that patients should sue the city council. The Health and Child Care Minister of Zimbabwe, Dr. David Parirenyatwa, has also put the onus directly on the Harare City Council, saying the Council has been slow to address breakdowns in city services. Blocked sewage pipes and disconnected water lines in crowded neighborhoods have all contributed to a situation primed for the spread of typhoid.

This is not the first time that the Harare City Council has come under fire for a typhoid outbreak. At this time last year, Harare was in the grip of an outbreak that continued through February and into March. Harare was only declared typhoid free in August, after two full incubation periods had come and gone without any new cases of typhoid.

But it didn’t take long for the next wave of typhoid cases to begin. By mid-October, in the wake of a historic drought, media outlets began reporting new cases of typhoid in Zimbabwe, affecting towns all over the country. This outbreak has been centered in Harare, however, and is due in part to local water shortages caused by the drought, which drove residents to drink from unsafe boreholes or wells. Legislators were quick to label it a national health crisis; already, hospitals were running out of typhoid medicine.

Despite the Harare City Council’s efforts to improve sanitation services like trash collection, a recent investigation by local news media found that half of Harare’s garbage collection vehicles are out of order, forcing residents in high-density suburbs to create their own illegal dump sites — including sewage and fecal matter that may contain typhoid — that often spill over into the water supply.

Now the Zimbabwean government is searching for solutions to stop the most recent outbreak. An ideal sustainable solution would be to properly vaccinate typhoid-susceptible populations, breaking the cycle of infection and disease spread while building proper water and sanitation infrastructure. For now, the government is forming an inter-ministerial committee to institute measures that would contain the disease, such as banning food vendors on the streets, enhancing waste management, stopping illegal dumpsites and providing health education. Not all of these measures are popular, however. Street food vendors have protested that they should not be stripped of their livelihoods for an outbreak that arose in part because of the government’s failure to uphold public services. The emergency measures also don’t address the underlying conditions that caused the outbreak – conditions that have persisted in Harare for over a year now.

Until the government institutes a sustainable typhoid immunization program, the government must prioritize clean water supply, working sewage pipes and reliable trash pickups. Although the underlying funding and infrastructure required might take years of money and effort, it is well worth it to invest in the long-term health of the population. Other preventative measures, such as using vaccines for outbreak control or rapid chlorination of the water supply, can save lives and prevent suffering while the government develops long-term water and sanitation interventions. Vaccination and water and sanitation improvements can be a powerful one-two punch in battling typhoid and stop the spread of typhoid Harare in 2017 and beyond.