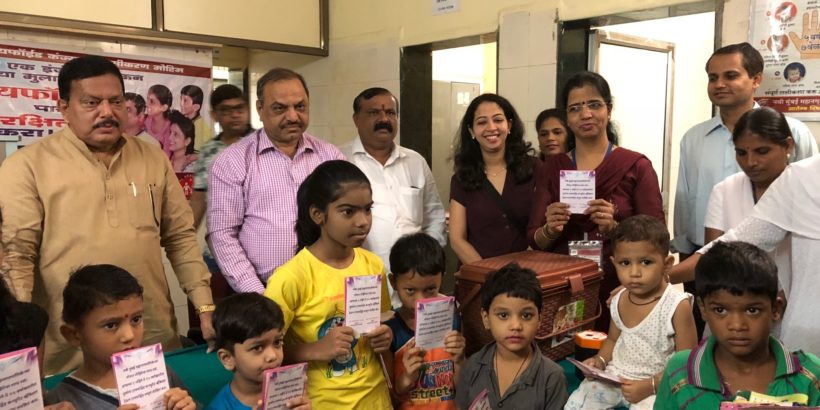 Typhoid is an all too common disease in India, where it is highly endemic and inflicts a significant public health burden. According to the latest estimates from the Global Burden of Disease Study, in 2016, India had 6.6 million cases and more than 66,000 deaths, 56 percent of which were among children younger than 15 years old. India alone bears the brunt of more than half the world’s typhoid burden. Thankfully, we have a new tool—a typhoid conjugate vaccine (TCV)—that has been prequalified and recommended by the World Health Organization (WHO) for use in endemic countries to prevent typhoid illness. Unlike the previous typhoid vaccines, TCV can be given to children as young as 6 months and only requires a single dose, providing longer-lasting protection at an earlier age.

In an effort to protect children from typhoid, the Navi Mumbai Municipal Corporation (NMMC) took a landmark decision to be the first in the world to introduce TCV into its immunization program, in two phases. NMMC launched the first phase of the TCV vaccination campaign in July with the WHO-recommended and prequalified vaccine—Typbar TCV®. While Typbar TCV has been available in the Indian private market since its licensure in 2013, the cost is too expensive for many families especially for those at risk of typhoid. This campaign marked the first public-sector introduction of TCV globally and aimed to vaccinate approximately 320,000 children aged 9 months to under 15 years in two phases. Bharat Biotech International Limited, the manufacturer of Typbar TCV, donated 100,000 doses to NMMC. Several organizations, including WHO-India (National Polio Surveillance Project – NPSP), the US Centers for Disease Control and Prevention (CDC), Indian Council of Medical Research (ICMR), Stanford University, the International Vaccine Institute (IVI), Grant Government Medical College (GGMC), and hospitals in Navi Mumbai, established a multipartner collaboration for various monitoring and evaluation components.

The planning and implementation of the vaccination campaign was conducted by NMMC with support from WHO-India NPSP, CDC, the Ministry of Health and Family Welfare – Government of India, Government of Maharashtra, and the private sector in Navi Mumbai (leading pediatricians, general practitioners, clinics and hospitals)—all working together toward a common goal of protecting children from typhoid. Prior to the start of the campaign, workshops and trainings were conducted for all medical officers, pediatricians, and the entire staff of the urban primary health centers (UPHCs). NMMC leadership also conducted social mobilization activities including distribution of pamphlets and information booklets, and media briefings and updates. Overall, 1,210 vaccination booths were set up across 11 UPHCs in hospitals, clinics, schools, and other designated locations, aiming to vaccinate children on weekends and public holidays from July 14 through August 25. The campaign also received wide support from private practitioners, particularly from the Indian Academy of Pediatrics (IAP) Navi Mumbai chapter—an excellent example of public-private partnership.

The first phase, completed in August, vaccinated more than 113,000 children in 11 UPHCs; the second phase of the campaign will be conducted in 2019 in the remaining 11 UPHCs. The campaign was well received by the community with high demand in some areas. Local ownership and leadership by NMMC and the private sector, tremendous efforts by all UPHC staff, and facilitation by WHO-India NPSP officers played a crucial role in the successful implementation of the campaign.

As the overall project lead at CDC, I feel proud of this initiative that we championed with NMMC, WHO-India NPSP, and all partners. Now that the first phase of vaccination is complete, we are continuing to conduct post-implementation evaluations for safety, coverage, effectiveness, cost-effectiveness and impact, while also preparing for the second phase of the campaign that will occur next year. We are hopeful that data from this campaign will demonstrate the real impact that TCVs can have in reducing the burden of typhoid and help to inform country-level decision-making for the introduction of TCV into national immunization programs in India and globally.

Kashmira Date is a medical officer and the technical lead for typhoid and cholera vaccines with the Global Immunization Division at the Center for Global Health, US Centers for Disease Control and Prevention.