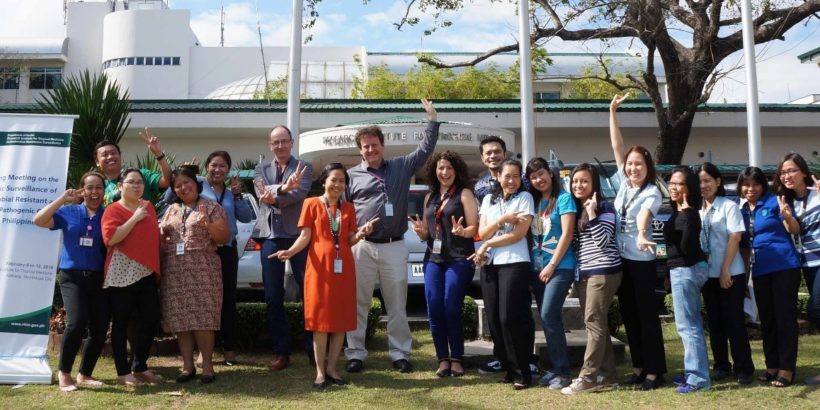 This blog is part of a broader series on drug resistance and its increasing threat to global health.

Drug resistance is a global health problem, with antibiotic-resistant pathogens found in all regions of the world. Surveillance data to track drug-resistant pathogens is critical to understand and halt their spread. Enhanced data from DNA sequencing—i.e., genomics—has gained a lot of traction for drug resistance surveillance. Genomics enables scientists to describe drug-resistant bacteria in terms of their strains. This knowledge can specify which genes enable the resistance and determine how those genes are transferred between bacteria. But despite the fact that low- and middle-income countries (LMICs) are predicted to be the most affected by drug-resistant diseases, genomic surveillance is less common in LMICs due to a lack of capacity.

A team of researchers at the Centre for Genomic Pathogen Surveillance (CGPS) and the Philippine Research Institute for Tropical Medicine (RITM) set out to change this by building genomic surveillance capacity in the Philippines. Its success shows the power of enhanced public health data for decision-making. It also provides an approach that could be extended to other LMICs to tackle drug resistance globally.

The Philippine Department of Health has a well-established, 30-year-old Antimicrobial Resistance Surveillance Program. The program uses laboratory-based methods to track drug-resistant pathogens. In 2018, in preparation for a genetic sequencing survey study, researchers helped set up the first DNA sequencing facility within this program. Working with local teams, this effort established local capacity in whole-genome sequencing and data interpretation.

Reported in Nature Communications, the study conducted DNA sequencing and analysis of drug-resistant bacteria samples from more than 20 sites across the Philippines. The analysis focused on bacteria prioritized by the World Health Organization for the development of new antibiotics, including the bacterium that causes typhoid. After collection and sequencing, the teams analyzed the data to determine how the bacterial strains relate to each other. This analysis had almost immediate benefit for public health decision-making, as it uncovered new drug-resistant strains of high public health concern. In one hospital, the analysis uncovered a drug-resistant pathogen in a neonatal intensive care unit that was spreading to the rest of the hospital. The data enabled hospital and local public health staff to strengthen infection control measures to prevent further outbreaks.

With genomic surveillance capacity, the Philippines now has a greater lens on drug resistance at the local, national, and international scale. It allows data analysis at a previously unattainable level. Those data are now being shared with Philippine public health agencies and the WHO to inform both local and global understanding of the spread of drug resistance. Countries and global agencies can then use the data to make better-informed decisions to prevent the spread of drug-resistant infections.

As the world faces new threats like COVID-19, tackling drug resistance is more urgent than ever. Preventive vaccines, hygiene and behavioral interventions, and new therapeutics can prevent the emergence of new, deadly pathogens. New technology and tools that enhance national and global capacity to understand the dynamics of drug resistance—such as genomic surveillance—will be necessary to inform these efforts.

The Philippines now offers an exemplary model for establishing genomic surveillance. Other countries could learn from its success. To take on global threats such as drug resistance, one thing is certain: the effort will need to be global as well.