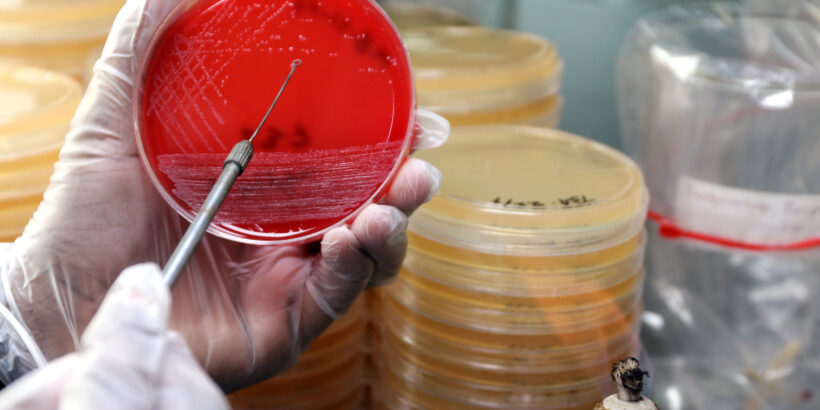 During the past few decades, new and increasingly drug-resistant strains of Salmonella Typhi, the bacteria that causes typhoid, have emerged and spread rapidly. Antibiotics have worked as an effective treatment for typhoid since the 1940s. Drug resistance makes antibiotics less effective. It leads to longer and more severe illness with an increased chance of complications and higher treatment costs.

Previous studies have explored the diversity of Salmonella Typhi strains using whole-genome sequencing, a surveillance tool that decodes and tracks pathogens’ DNA. However, most of these studies involved a small number of samples. To gain a more comprehensive view of typhoid evolution across time and place, we recently undertook a study involving the largest ever genome sequencing effort of Salmonella Typhi. Our team sequenced the genomes of 3489 new typhoid samples from large surveillance studies in Bangladesh, Nepal, Pakistan, and India. We combined these with 4169 previously sequenced samples collected from around the world since 1905. Using these genomes, we conducted analyses to answer questions about when, where, and how drug-resistant typhoid has arisen and spread.

We dive into some of our findings below.

How did drug-resistant typhoid evolve?

Our results indicate that south Asia is a crucial hub for typhoid drug resistance genetic evolution. Drug-resistant strains that emerge in this region have spread across regional and intercontinental borders hundreds of times. After spreading, these strains typically expand and replace the existing local drug-susceptible strains. For example, the multidrug-resistant (MDR) typhoid lineage H58, which is resistant to three frontline antibiotics, first emerged in south Asia in the 1980s. The H58 lineage now makes up the dominant strains in many parts of Africa.

The acquisition of drug resistance genes could happen anywhere. However, we found that these events predominantly occur in south Asia before spreading to other regions. The Indian subcontinent—which has the highest burden of typhoid in the world—appears to be the origin for most Salmonella Typhi lineages. The region’s high burden, combined with limited diagnostic capacity and resulting inappropriate use of antibiotics, enables Salmonella Typhi to repeatedly evolve and develop resistance.

What are the current trends for typhoid strain evolution?

Our analysis suggests that, in south Asia, MDR strains are in decline, being replaced with strains containing ceftriaxone resistance (i.e., extensively drug-resistant [XDR] typhoid), high-level fluoroquinolone resistance, or recently emerged azithromycin resistance. Although researchers expected to see a reduction in the spread of typhoid when MDR strains started declining, it did not happen. Instead, we observed an increased spread with the emergence of these new resistant lineages.

In contrast to south Asia, however, MDR typhoid does appear to be increasing in parts of Africa. Several MDR typhoid outbreaks have been reported in African countries in the past decade, including in Malawi, Kenya, and Uganda.

What are the major concerns?

As the world faces increasing drug resistance from multiple pathogens, the spread of any drug-resistant typhoid strain is a major global concern. Current strains are increasing typhoid’s burden on health systems and creating national- and community-level economic challenges.

We are also particularly concerned about the potential future development of XDR Salmonella Typhi strains that are resistant to azithromycin. These have not been identified. But given the spontaneous emergence and spread of azithromycin resistance mutations, scientists are anxiously tracking this possibility. Such organisms would preclude effective treatment with all established oral antibiotics. It would mean untreatable typhoid—and result in increased morbidity and mortality.

How can we prevent further spread of drug-resistant typhoid?

Salmonella Typhi has an advanced ability to evolve and develop resistance to treatment, and the best way to prevent further evolution and keep communities safe in the near-term is through vaccination with typhoid conjugate vaccines (TCVs). Routine immunization with TCVs can protect populations from typhoid infection, denying the bacteria the chance to replicate, evolve, and spread. We also need improved global surveillance for typhoid, faster and more accurate diagnoses, and diligent antibiotic stewardship.

South Asia is a hub for typhoid evolution. However, the mutations do not stay in south Asia. Anywhere with limited access to safe water and improved sanitation is at risk for drug-resistant strains to take hold. We need to collectively own typhoid control through a global and regional lens, not just as a single country’s priority.

Improved water and sanitation infrastructure is the best way to prevent typhoid in the long term. These costly investments take considerable time and resources. As drug-resistant typhoid continues to evolve and spread, TCV is a safe, effective, and proven way to keep communities safe and stop further emergence of drug-resistant typhoid now.