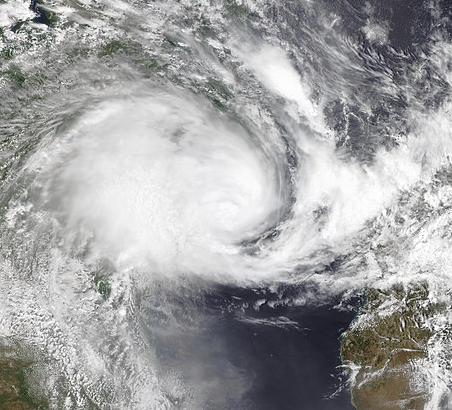 When Tropical Storm Ana made landfall in January, it left a path of destruction in its wake across five countries―Madagascar, Mozambique, Malawi, Zambia, and Zimbabwe. Heavy winds and torrential rain caused overflowing rivers, severe flooding, and landslides. As a result, roads, homes, and other infrastructure such as health care facilities suffered severe damage. This damage forced hundreds of thousands of people to leave their homes. It also led to the disruption of health care services throughout the impacted areas.

Tropical Storm Ana is one of the latest examples of how the health of our planet dramatically impacts human health. Scientists predict an increase in the number and intensity of natural disasters due to climate change. This means more frequent and bigger storms, leading to more extreme and dangerous flooding. Flooding, in turn, can lead to an increase in illness from infectious diseases including typhoid and other waterborne diseases. It can also overwhelm water and sanitation systems, causing a shortage of safe water—yet another risk factor for typhoid and many other diseases.

The damage left behind from storms can cause additional health challenges. Sick individuals may be unable to get to a health facility due to impassable road conditions. Those who do make it may find facilities damaged from the storm or operating at decreased capacity. Many may seek refuge in temporary, emergency shelters if their homes have been destroyed. These shelters, while a lifeline for those who need them, are typically overcrowded and under-resourced. They typically lack safe water and sanitation systems.

We spoke with our typhoid colleagues and partners in affected countries to learn more about how Tropical Storm Ana impacted health in their communities.

Take on Typhoid: What health-related challenges did your country face in the aftermath of Tropical Storm Ana?

Esau Mkisi, PATH Malawi: Tropical Storm Ana affected Malawi in a big way. Communities were displaced; there were increased cases of diarrhea, malaria, and other nutritional challenges since most community members did not have food because it was lost with the swelling waters.

Theressa Misiri, Malawi-Liverpool-Wellcome Trust (MLW): The community suffered damages including loss of houses, washed out roads, and loss of life and property. People lived in camps requiring basic life support. MLW supported the huge community need with daily basic materials, moral support, and risk assessments. Villagers are still recovering from the trauma and loss of beloved lives and goods during Cyclone Ana. They are rebuilding their lives slowly as finances have been a barrier to recovery as well.

Take on Typhoid: Did the storm disrupt health care services and/or safe water supplies? If so, how?

Dr. Ngina Nampota, BMP Malawi: Access to health care facilities were difficult because of the heavy rains, flooding, and destruction of roads and bridges, especially in the worst hit cities like Chikwawa. The clean water supply was interrupted because the cyclone damaged the equipment used to pump water. Taps were dry for a couple of days. When the water supply resumed in Blantyre, the quality was compromised with a high content of ‘organic material’. Luckily it was resolved after a few days.

Harotoky Milarimanana, PATH Madagascar: There are cases where the supply of safe water is interrupted after each Tropical Storm. Health care services were not disrupted.

Esau Mkisi, PATH Malawi: The storm blew off the roofs of most buildings, including some health facilities, leaving most homes uninhabitable. Swollen rivers destroyed roads and most pipes for both water and electricity. There was no electricity for days, and this affected the cold chain in most health facilities. Most families lacked safe water for days and they resorted to using other unsafe sources because of the damaged water pipes. There was a high likelihood that ground water sources were contaminated with feces through seepage for those using boreholes.

Tropical Storm Ana had a devastating impact on these communities. Increased risk of infectious diseases such as typhoid is a consequence of climate change and the resulting increase in extreme weather events.

Disease prevention can help mitigate this risk. For typhoid, typhoid conjugate vaccines can provide protection for those living in typhoid-endemic communities and in areas prone to extreme floods and droughts.  As severe climate events occur more frequently and with more intensity, it is imperative that decision-makers urgently consider TCV introduction as part of an integrated disease control strategy.