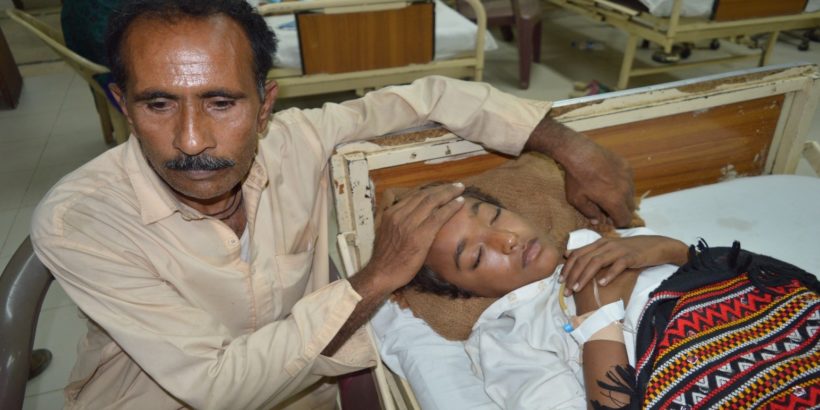 The impact of typhoid extends beyond the person who is sick. Treating typhoid is often a complicated and costly process, and can have a long term impact on entire families. When a young child falls ill, a family must pay direct expenses such as transportation to a health care facility and antibiotics when they are prescribed; yet there are indirect costs too, including the time away from income-generating activities. When older children or adults are ill with typhoid, the financial impact is felt doubly hard, as there are costs to treat, but also the loss of this family member’s income.

Typhoid conjugate vaccines, alongside access to safe water, improved sanitation, and practicing handwashing, provide integrated prevention and control measures that can save someone from falling ill in the first place. If family members stay healthy, children stay in school and adults are able to continue working.

Badin, whose story we profile below, fell gravely ill with typhoid and received care with the support of his extended family. Thankfully, Badin fully recovered, but typhoid had a substantial impact on his family and his future.

I am a 10-year-old boy from a village in district Badin in Sindh province of Pakistan. None of my ten siblings or I have ever been to school. My father is a vegetable seller and earns about three or four dollars a day – which is only enough for two meals – so we stay at home, helping our father with his work and playing with our friends.

In early February, I felt very weak while playing cricket and found it difficult to run after the ball. I went back home and told my mother that I wasn’t feeling well. I stayed in bed for three days, but my body temperature kept increasing and I felt like I was on fire. My father took me to a nearby doctor who gave me some medication and charged us six dollars. I took the medication for four days, but my body was still burning like an oven and I was so tired that I couldn’t even walk properly. I was taken to another doctor, who gave me a blood test and diagnosed typhoid. He charged us 27 dollars and prescribed more medication. I took the medication for the next five days, but my condition did not improve. I started vomiting and having pain in my stomach, and could not even take a sip of water.

My mother was very worried, so she asked my father to take me to the hospital in Badin. My father knew he had no money for transport and hospital care. He sent me with my uncle anyway, and stayed at his job so that he could send us some money.

At the hospital, I was seen by a surgeon who said my intestine had burst and only a major surgery could save my life. We needed more money to proceed but we didn’t have a penny left. I could see my uncle’s helpless and worried face. I started crying and holding my uncle’s hand tightly, thinking it was the end of my life. My uncle went outside and made phone calls to his acquaintances asking for money. Then an ambulance driver, who I now think is an angel, approached my uncle and suggested that he take me to the National Institute of Child Health (NICH) in Karachi, where patients are treated at almost no cost.

On February 24, I reached Karachi in an ambulance, paying $45 for the four-hour journey. I was accompanied by my mother, older brother, uncle, and three other relatives. I underwent surgery the same night, and now after five days I am recovering fast. I feel like I have been given another life. My uncle supported my family throughout my illness. He not only provided financial support but also helped us not lose hope. Now I look forward to going back to my village and helping my uncle at his shop where he sells fodder for cattle.

Photo: Bashir with his uncle, Mushatq Ahmed, after surgery