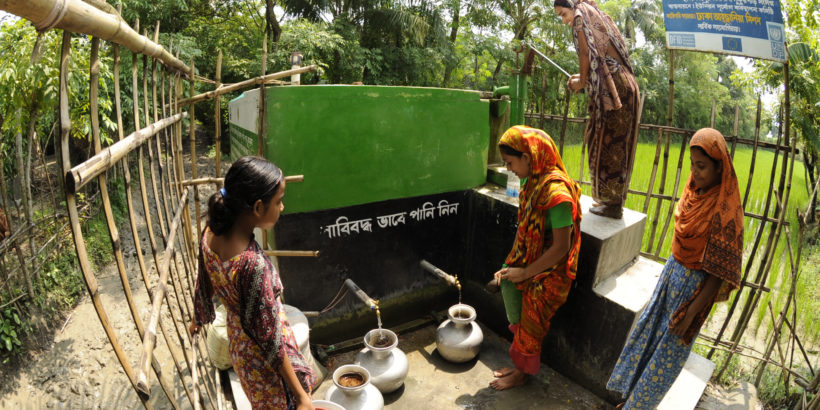 This blog is part of a broader series on drug resistance and its increasing threat to global health.

Antimicrobial resistance (AMR) is a critical problem in typhoid fever (caused by Salmonella Typhi) as well as in paratyphoid fever (caused by Salmonella Paratyphi)—collectively referred to as enteric fever. Slowing the spread of AMR requires our urgent attention. Drug-resistant infections can have severe consequences, including longer illness, higher mortality, and longer hospital stays, which can contribute to a cycle of poverty for families who must pay for treatment costs and miss work to care for family members who fall ill.

Fluoroquinolones, an important and powerful antibiotic class, have become widely ineffective in the treatment of enteric fever, and effective alternatives—such as ceftriaxone and azithromycin—are more expensive and may not be affordable or available in low-resource settings, putting patients at risk of severe complications. Additionally, an infection like enteric fever, which is entirely preventable, fuels antimicrobial use and exposes bystander organisms to antimicrobials, further contributing to the resistance problem.

In order to see how widespread drug resistance is in enteric fever, my team and I at the Global Burden of Disease-AMR (GRAM) project conducted a systematic review of resistance to all antibiotics that are recommended by the World Health Organization (WHO) for typhoid treatment. This included multidrug resistance (MDR; defined as resistance to ampicillin/amoxicillin, chloramphenicol and co-trimoxazole) as well as fluoroquinolone (e.g. ciprofloxacin), ceftriaxone, and azithromycin resistance, by regions of the world and in 5-year time periods.

The study, reported in BMC Medicine, uncovered major increases in drug resistance over almost 30 years from 1990 to 2018, a time when typhoid fever went from being relatively easy to treat to being close to untreatable in some parts of the world. This increase was particularly marked for fluoroquinolone-resistant S. Typhi in South and Southeast Asia. Resistance trends worsened for all antimicrobials in all regions, with the exception of MDR S. Typhi in South Asia (except Pakistan), which declined between 1990 and 2018.

So what interventions are needed to curb the spread of AMR? The most important intervention is an integrated package of solutions focused on reducing the number of infections. For enteric fever, which is transmitted fecal-orally and endemic in many low- and middle-income countries, this can be achieved through provision of clean water, improvements in sanitation, and access to toilets and handwashing facilities, collectively known as WASH. All of these interventions are needed—they will have the added benefit of reducing the burden of other waterborne infections.

However, while improvements in WASH play a key role in combating enteric fever, progress can be slow and often costly. Given the growing threat of drug resistance, vaccines are a critical tool to reduce typhoid, particularly in high-risk endemic areas. The WHO recommends that typhoid-endemic countries introduce typhoid conjugate vaccine into routine infant immunization programs, which can reduce the need for antibiotics and slow expansion of drug-resistant strains. However, there is currently no licensed vaccine against paratyphoid fever.

Additionally, swift and early diagnosis and treatment will help reduce transmission, but the surveillance and diagnosis of enteric fever and other bacterial infections is challenging in resource-limited settings. Investments in microbiological culture facilities and capacity building are necessary to collect data on the incidence of disease and the resistance profile to inform appropriate antibiotic treatment. Further, robust and reliable rapid tests (although unable to determine the resistance profile) would also help ensure those who are sick receive timely medical attention and appropriate treatment.

To achieve control of AMR, strong partnerships between the WHO, governments, nongovernmental organizations, academia, the private sector and communities, are needed.

About us: The GRAM (Global Burden of Disease-AMR) project

Our project is a collaboration between the University of Oxford and the Institute for Health Metrics and Evaluation at the University of Washington. The aims of our project are to gather and synthesize AMR data for selected bacterial pathogens (including enteric fever) from 1990 until now, to use geospatial modelling techniques to examine the spatial and temporal distribution of resistance  and to incorporate the mortality and morbidity attributable to AMR into the Global Burden of Disease study.

In our systematic review, we aimed to select studies with representative samples that performed blood culture and antimicrobial susceptibility testing (AST) on S. Typhi and S. Paratyphi A isolates. We identified several data gaps and some limitations, for example, in Africa, data were only available in ten countries. Many studies did not report the full methodological detail on AST. However, at the time of our study, there were no clear reporting guidelines for microbiology data. Since then, relevant reporting guidelines (‘MICRO’) have been published.

If you would like to get involved in our project, please contact Prof. Christiane Dolecek (christiane.dolecek@ndm.ox.ac.uk) and Dr. Barney McManigal (barney.mcmanigal@ndm.ox.ac.uk).